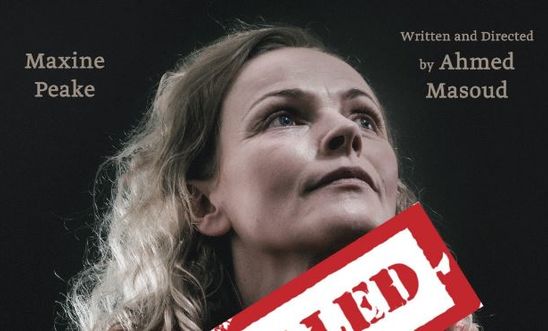 Maxine Peake explained her decision in a video message

The actor Maxine Peake has cancelled a play due to have been performed in London next week as a protest to highlight the plight of Palestinian playwrights and other artists targeted by the Israeli authorities.

The one-person piece, Obliterated, by the acclaimed UK-based Palestinian playwright Ahmed Masoud, was due to have been performed at Amnesty International UK’s east London headquarters on the evening of 9 August, and was set to star the Dinnerladies and Shameless actor.

The scheduled performance - which is fully booked - would have marked exactly one year since the destruction by an Israeli airstrike of the Mishal Cultural Centre last year, the only working theatre in Gaza which housed numerous arts projects in the beleaguered Palestinian territory.

All the theatre-goers who reserved tickets for the free, one-night-only performance have been informed of the reasons for the play’s cancellation, receiving an email and a special video message from Peake - which includes the moving recital of a poem from the Palestinian poet Farah Chamma.

“There was once a theatre that was obliterated. There was a show that did not go on.

“Our play is cancelled because art should not be targeted by soldiers or anyone else, in Gaza or anywhere else.

“The show is cancelled. The show must not go on - until we, they, all of us, are free.”

“I am an artist from Gaza and I was shocked by what happened to the only theatre in Gaza. How could a theatre be bombed just like that, without any warning?

“A theatre is not part of a conflict - I cannot stay silent about the bombing of a theatre.”

“The cultural life of Palestinians is effectively at the mercy of the occupying Israeli forces, and this cancelled event is just a very a small reminder of the harsh everyday realities confronting anyone involved in the arts in the occupied Palestinian territory.

“Amazingly, despite everything, Palestinian playwrights, writers and poets are still producing wonderful work, but they shouldn’t have to endure roadblocks, arrests, physical threats and the out-and-out destruction of their arts centres.

“We’re calling for the Israeli authorities to end their persecution of Palestinian artists.”