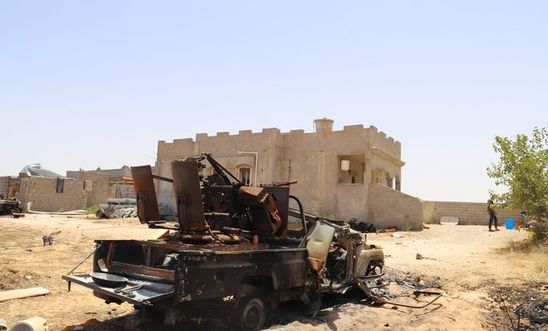 According to the UN, at least 284 civilians were killed in fighting in Libya last year © Amnesty International

Justice for the victims of war crimes committed by both major parties to the conflict in Libya must be the cornerstone of any peace deal that may emerge from a UN-led summit in Berlin this Sunday (19 January), said Amnesty International.

According to the UN, at least 284 civilians were killed and more than 140,000 displaced as a result of fighting in Libya last year.

The UN has denounced a recent escalation in indiscriminate strikes that have endangered schools, medical facilities and other civilian sites in and around Tripoli, including Mitiga International Airport.

In October, Amnesty released the findings from the only in-depth field investigation across the Tripoli frontlines, after visiting 33 air and ground-strike sites in the capital and surrounding areas. Amnesty’s research unearthing evidence of potential war crimes committed by both the UN-backed Government of National Accord and forces from General Haftar’s self-proclaimed Libyan National Army.

Amnesty’s post-blast investigations also confirmed evidence of foreign involvement in the conflict. Despite a longstanding UN embargo on arms shipments to Libya, the UAE and Turkey - among others - have been backing the Libyan National Army and Government of National Accord, respectively, through illicit arms transfers and direct military involvement in attacks on civilians. Evidence has also emerged of the involvement of Russian mercenaries in support of Haftar’s forces.

“We witnessed up-front the devastating aftermath of indiscriminate and disproportionate attacks - including possible war crimes - by both parties to the conflict.

“The international community, including all those participating in the Berlin summit, must uphold the UN arms embargo on Libya, and work with the UN Human Rights Council to urgently establish a commission of inquiry or similar mechanism to preserve evidence of war crimes.”

The conflict in Libya has also exacerbated the already-dire predicament of thousands of migrants and refugees in the country, including many trapped in Libya as a result of controversial migration-interception deals between European governments and Libyan authorities. Amnesty has documented how the EU and Libya’s policy of intercepting migrants and refugees - and forcibly returning them to Libya - has exposed people to prolonged arbitrary detention, torture and even death, including in attacks from combatants in the armed conflict.

EU countries attending the Berlin summit must discontinue any measures that contribute to people being trapped in Libya, and pressure the Libyan authorities to end the prolonged arbitrary detention of refugees and migrants. Amnesty is also calling for the evacuation of refugees and migrants from Libya, including through resettlement and alternative pathways to protection.