Libya: migrant centre attack should be investigated by ICC as possible war crime 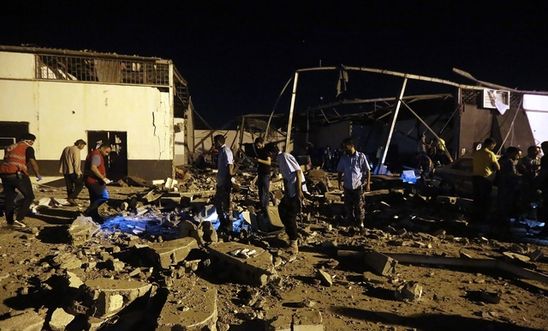 Up to 300 frightened migrants now on streets of Tajoura

The International Criminal Court must order an urgent investigation into the overnight attack on the Tajoura immigration detention centre in eastern Tripoli, Libya, in which at least 40 refugees and migrants were killed and more than 80 injured, said Amnesty International.

This morning, Amnesty spoke to three refugees who survived the attack. One of these, an Eritrean national, said a first airstrike hit a hangar adjacent to the detention centre, followed by a second strike that hit the men’s cell five minutes later.

Amnesty has analysed and verified video footage and photos from the scene, geolocating them to the Tajoura centre, which is managed by the General Directorate for Combating Illegal Migration under the Libyan Ministry of Interior. A photo from the men’s cell shows a large crater, several metres across, consistent with damage caused by an air-dropped bomb.

Amnesty’s research indicates that a warehouse used to store weapons was located in the same compound. Following an airstrike that hit a military vehicle approximately 100 metres from the centre on 7 May, Amnesty warned the Libyan authorities that they were endangering people’s lives by detaining them close to military targets. UNHCR had also called for the urgent relocation to safety of people in detention centres located in conflict areas in Tripoli. Amnesty’s research has also confirmed that some detainees had been forced to work at the military site in Tajoura - also a violation of international law.

Following last night’s attack, up to 300 migrants and refugees - some of whom were returned to Libya after being intercepted in the Mediterranean in recent weeks - are now out in the streets of Tajoura, frightened and waiting for urgent assistance.

While it is still unclear who was behind the attack, media reports this week indicated that the self-proclaimed Libyan National Army recently received F-16 fighter jets, which are capable of carrying out a night-time airstrike that could cause damage of this type. Reported casualties from the attack doubles the overall civilian death toll since the Libyan National Army’s offensive to capture Tripoli from the internationally-recognised Government of National Accord began on 4 April, according to UN figures.

“The International Criminal Court should immediately investigate the possibility that this was a direct attack on civilians.

“This attack should shame all sides into taking immediate action to remove migrants and refugees from areas of active conflict where their lives are endangered and to end their cruel practice of arbitrarily detaining migrants.

“This attack should be a wake-up call for EU states to end their shameful policies in outsourcing migration control to Libya in their bid to reduce the number of refugees and migrants arriving on European shores.

“They can no longer turn a blind eye to the inhuman conditions, torture, rape and other abuse refugees and migrants face, or their failure to support refugees to reach safety by offering sufficient resettlement places.”

Amnesty has warned that breaches of the UN arms embargo on Libya are fuelling violations - including war crimes - in the battle for Tripoli. Since the battle began, more than 100,000 civilians have fled their homes, electricity has been repeatedly knocked out and indiscriminate rocket and artillery attacks have repeatedly put civilians’ lives in grave danger.