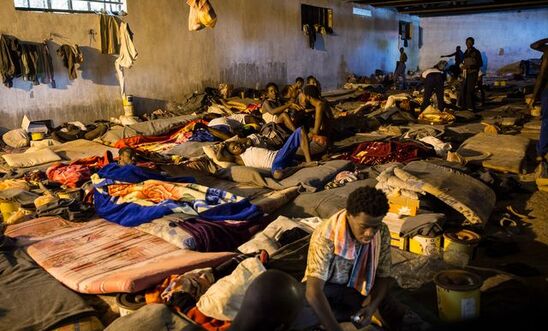 More than 700 drownings in central Mediterranean in last six months, with Libyan coastguard sometimes filming people in the sea rather than rescuing them

Amnesty International has published fresh evidence of appalling human right abuses against people detained in Libya’s notorious migrant detention centres as it called on European countries to suspend border control cooperation with Libya ahead of a debate by the Italian parliament on the issue this week.

Amnesty’s 52-page report - 'No one will look for you': Forcibly returned from sea to abusive detention in Libya - details the harrowing experiences of 53 refugees and migrants who were held in the detention facilities, 49 of whom were detained after their interception at sea.

Former detainees at Tripoli’s Shara’ al-Zawiya centre said guards raped women and others were coerced into sex in exchange for their release or for essentials like clean water. Two young women at the facility attempted to take their own lives as a result of abuse. Three women also said that two babies detained with their mothers after an attempted sea crossing died after guards refused to transfer them to hospital for urgent medical treatment.

Shara’ al-Zawiya was previously run by militia groups but has recently been integrated into Libya’s Directorate for Combatting Illegal Migration, part of the interior ministry. Another Directorate facility has been established on the site of the Tajoura detention centre which was closed in August 2019 after airstrikes killed at least 53 detainees. This has now been rebranded the Tripoli Gathering and Return Centre (known informally as Al-Mabani), with Tajoura’s former director and other old staff put in place.

Between January and June 2021, more than 7,000 people intercepted at sea were taken to Al-Mabani. Detainees told Amnesty how they faced torture, cruel and inhuman detention conditions, extortion and forced labour. Some reported being subjected to invasive, humiliating and violent strip-searches. In Al-Mabani and two other facilities Amnesty documented, guards and other armed men unlawfully used lethal force - shooting at detainees and causing deaths and injuries.

Despite repeated promises to deal with such abuses, the Libyan authorities have failed to do so - while the Directorate has effectively legitimised abuse by its integration of notorious militia-run facilities.

“This horrifying report sheds new light on the suffering of people intercepted at sea and returned to Libya, where they are immediately funnelled into arbitrary detention and systematically subjected to torture, sexual violence, forced labour and other exploitation with total impunity.

“The Libyan authorities have rewarded those reasonably suspected of committing such violations with positions of power and higher ranks, meaning that we risk seeing the same horrors reproduced again and again.

“Despite overwhelming evidence of reckless, negligent and unlawful behaviour by Libyan coastguards at sea and systematic violations in detention centres after disembarkation, European partners have continued to support Libyan coastguards to forcibly return people to the very abuse they fled in Libya.”

Between January and June 2021, EU-backed Libyan coastguards intercepted some 15,000 people at sea and returned them to Libya - more than in all of 2020 - during what they describe as “rescue” missions.

People interviewed by Amnesty consistently described coastguards’ conduct as negligent and abusive. Survivors described how coastguards deliberately damaged their boats - in some cases causing them to capsize - leading refugees and migrants to drown on at least two occasions. One eyewitness said after coastguards caused a dinghy to capsize they filmed the incident with their phones instead of rescuing survivors. More than 700 refugees and migrants drowned along the central Mediterranean route in the first six months of 2021.

Refugees and migrants told Amnesty that as they attempted sea crossings, they frequently saw aircraft overhead or ships nearby that did not offer them assistance before the Libyan coastguards’ arrival. Frontex, the European Border and Coast Guard agency, has carried out aerial surveillance over the Mediterranean to identify refugee and migrants’ boats at sea and has operated a drone over this route since May.

European navies have largely abandoned the central Mediterranean to avoid having to rescue refugee and migrants’ boats in distress. Italy and other EU countries also continue to give material assistance - including speedboats - to Libyan coastguards and are developing a maritime coordination centre in Tripoli.

Downloads
'No one will look for you': Forcibly returned from sea to abusive detention in Libya