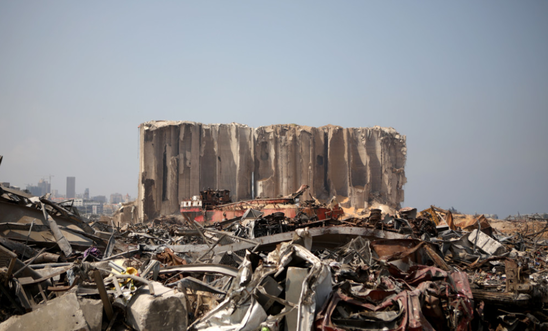 The Lebanese authorities have spent the past year shamelessly obstructing victims’ quest for truth and justice following the catastrophic port explosion in Beirut, said Amnesty International today, ahead of the one-year anniversary of the devastating blast.

The huge explosion killed at least 217 people and injured another 7,000 when 2,750 tons of ammonium nitrate exploded in a port warehouse on 4 August 2020. The blast caused massive destruction, damaging buildings across a 12-mile radius and displacing 300,000 people.

However, for the past year the Lebanese authorities have sought to shield officials from scrutiny over any responsibility for the explosion, repeatedly hampering any investigation into its causes.

Leaked official documents indicate that Lebanese customs, military and security authorities - as well as the judiciary - had warned successive governments of the dangerous stockpile of explosive chemicals at the port on at least ten occasions in the past six years, yet no action was taken. The president also admitted he had knowledge of the danger but had “left it to the port authorities to address”.

Since the explosion, MPs and officials have sought to block investigative efforts while claiming immunity for themselves - a tactic also used repeatedly in the context of a post-conflict amnesty in Lebanon which has long shielded suspected perpetrators of serious crimes under international law. The Lebanese authorities dismissed the first judge appointed to investigate the explosion after he summoned political figures for questioning, while rejecting a replacement judge’s request to lift MP immunity and question senior members of the security forces (see details below).

As the first anniversary of the blast approaches, deeply traumatised residents of Beirut are still reeling from its catastrophic impact. Mireille Khoury, whose 15-year-old son Elias died of injuries sustained in the explosion, described the events of that day to Amnesty. She said:

“The day of 4 August seemed like the end of the world. We thought it was just a fire … I passed out and then woke up to find my house in ruins. My daughter asked me what happened. She was injured and I was injured too. I rushed outside and found my son on the staircase injured and covered with blood … On that day, they ruined our lives. If the Lebanese authorities allow this crime to pass without accountability, they will go down in history in the most horrendous manner.”

Amnesty is supporting the families of victims in calling on the Lebanese authorities to immediately lift all immunities granted to officials, regardless of their role or position.

In June, Amnesty wrote to the UN Human Rights Council as part of a coalition of more than 50 organisations calling for an international fact-finding investigation into the explosion. The letter highlighted the procedural and systemic flaws which prevent Lebanon from meeting its international obligations to provide redress to victims.

“The Lebanese authorities promised a swift investigation; instead they have brazenly blocked and stalled justice at every turn, despite a tireless campaign for justice and criminal accountability by survivors and families of victims.

“Given the scale of this tragedy, it is astounding to see how far the Lebanese authorities are prepared to go to shield themselves from scrutiny.

“In blocking the judge’s attempts to summon political officials, the authorities have struck yet another blow to the people of Lebanon.

“The UN Human Rights Council must heed their call and urgently set up an investigative mechanism to identify whether conduct by the state caused or contributed to the unlawful deaths.”

In response, on 17 December 2020 Judge Sawan suspended the investigation for nearly two months. Then, on 18 February, the Court of Cassation dismissed Sawan, prompting street protest from families of the victims.

A month ago (2 July), the new judge assigned to the case, Tarek Bitar, submitted a request to parliament to lift immunity for MPs Ali Hasan Khalil, Ghazi Zeaiter and Nouhad Machnouk, along with several other high-ranking officials. In response, 26 MPs from the blocs of Speaker of Parliament Nabih Berri, Amal Movement, Hezbollah, and Future Movement, signed a petition requesting the launch of parallel proceedings in an attempt to avoid questioning by Bitar. In a separate move, the Minister of Interior rejected a request by Bitar to question the head of General Security, Abbas Ibrahim. In recent more positive moves, both the Beirut and Tripoli bar associations have lifted immunities from officials who are also lawyers - though parliamentary immunities remain in place.

Granting immunity to political officials directly contradicts Lebanon’s obligations under the UN 2016 Minnesota Protocol which aims to protect the right to life and advance justice and accountability for unlawful deaths. The protocol identifies a potentially unlawful death as occurring “where the state may have failed to meet its obligations to protect life”. In such cases, states have a duty to hold perpetrators accountable, and impunity stemming from “political interference” or “blanket amnesties” directly contradicts that duty.