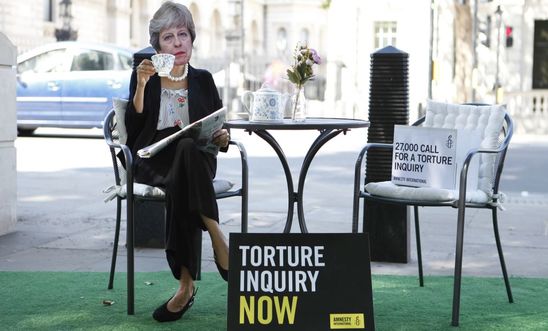 A group of leading human rights organisations have issued a fresh call for an inquiry into the UK’s involvement in rendition and torture.

Handing a 27,000-signature petition in to Downing Street this morning, the campaigners - Amnesty International, Freedom from Torture, Liberty and Reprieve - are calling on Theresa May to order an independent, judge-led inquiry into the issue.

In a letter to the Prime Minister, the campaigners say “a judge-led inquiry remains the only way to draw a line under the UK’s regrettable involvement in the rendition and torture of people during the US-led ‘war on terror’, and ensure nothing like this ever happens again”.

The call comes after the publication in June of two damning but incomplete parliamentary Intelligence and Security Committee (ISC) reports into the UK’s involvement in numerous cases of rendition and torture.

While outlining the scale of the issue - involving numerous cases where MI6 or MI5 suggested, planned or agreed to overseas rendition operations, and more than 200 cases where they sent questions to overseas governments and interrogators knowing or suspecting that detainees were being mistreated - the ISC said it had been blocked by the Government from accessing all the necessary evidence and prevented from conducting a credible, thorough inquiry.

“A curtain has been lifted to reveal some of the grisly reality of UK officials’ involvement in torture, but now we need to see a proper inquiry into it - to understand the full extent of what happened, learn lessons and ensure people are held accountable for their actions.”

“After the Prime Minister’s unprecedented apology to Abdul Hakim Belhaj and Fatima Boudchar earlier this year, we now know that there were hundreds of other cases where UK personnel were allowed to become involved in torture and rendition. But we are far from knowing the full truth, after the Prime Minister blocked the Intelligence and Security Committee from hearing and seeing key evidence. Only an independent, judge-led inquiry, with full powers to interview witnesses and secure all the evidence, can draw a line under this dark period of Britain’s recent history.”

“MPs on all sides are now calling for the accountability that we have long been demanding for the sake of those who have survived torture. Britain needs to stand up against torture, not be complicit.  The Prime Minister must act to ensure this can never happen again.”

“Eight years after it was promised, we are shamefully still waiting for the judge-led inquiry into the UK’s involvement in torture and rendition. A proper, independent investigation with full access to witnesses is the only way to get to the bottom of our country’s part in the unforgiveable mistreatment of people around the world and to make sure it never happens again. The Prime Minister must now finally make good on this promise - it cannot be ignored any longer.”