Kazakhstan protests - 'crisis is far from over' 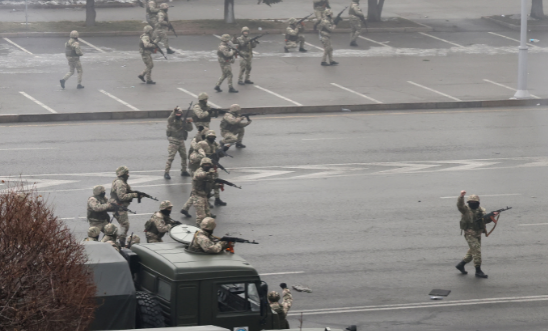 Security forces are used in a counterterrorism operation to stop mass unrest. Protests were sparked by rising fuel prices in the towns of Zhanaozen and Aktau in western Kazakhstan on 2 January and spread rapidly across the country. © Valery Sharifulin/TASS

Almost 10,000 have been arrested since protests began

Amnesty International is calling on the Kazakhstani authorities to release journalists and activists who have been arbitrarily detained for their coverage of mass protests across the country, provide information on all protest-related arrests and ensure human rights of all detainees over the past week.

“While the situation appears to have calmed down in Kazakhstan, the crisis is far from over. Nothing is more important now than free access to independent information, full accountability for what has happened and a commitment to respect human rights moving forward.

“The silence of the authorities regarding the number of victims and the circumstances of their death is outrageous. Information about civilian causalities must be disclosed immediately.

“We remain deeply concerned about the way President Tokayev has blamed journalists and human rights defenders on national television for inciting unrest – a narrative that has since been adopted by various people in positions of authority in Kazakhstan.

“We are extremely worried about the conditions of detention and the grounds for arrest of thousands of detainees. There are also missing individuals, including journalist Makhambet Abzhan, whose whereabouts remain unknown since 6 January.

“All those who have been arbitrarily detained merely for taking part in the protests must be immediately released. Protesters accused of committing internationally recognised crimes for violent behaviour must be provided with fair trials in accordance with international human rights law. Meanwhile, all reports of ill-treatment by officials must be effectively investigated, with those responsible held to account.”

Those among the detainees who committed no internationally recognised crimes and were arbitrarily detained, including merely for violating Kazakhstan’s unduly restrictive legislation on public assemblies, must be immediately released.

Amnesty also calls on the Kazakhstani authorities to order an effective and impartial investigation into all reported human rights violations, including lethal use of force by the security forces, and to respect human rights in the context of the unrest.

The exact number of casualties in Kazakhstan resulting from the recent violence remains unknown. The authorities confirmed that at least 18 law enforcement officers had been killed but have so far failed to disclose the number of civilian casualties.

On 9 January, a Telegram-channel associated with the government released information about the deaths of 164 individuals, but it was later disavowed by the Ministry of Health as a technical glitch.

The Kazakhstani authorities disabled the Internet and restricted mobile communications for five days after the start of the protests. Meanwhile, they blamed human rights defenders and activists for spurring the demonstrations and proceeded to arrest independent journalists.

On 5 January, two journalists from the RFE/RL local radio service Azattyk were detained and interrogated in connection with their work during the protests.

On 7 January, Lukpan Akhmedyarov, the editor of Uralskaya Nedelya newspaper, was arrested in Uralsk and sentenced to 10 days of detention for allegedly violating Kazakhstan’s unduly restrictive assembly rules.

On 10 January, the authorities also ordered independent media outlet Fergana.ru to remove a report on the crisis or face criminal prosecution.

There are also reports of foreign journalists being denied entry into the country. Meanwhile, Internet access was re-established by 10 January but it’s still being regularly blocked by the authorities, and mobile messengers remain inaccessible locally.

“The authorities must restore unrestricted access to the Internet, unblock all other forms of communication and stop meting out reprisals against those who share news independently. Amid crisis, independent information is crucial. The authorities’ knee-jerk blackout was akin to holding the entire population incommunicado.”

Ill-treatment and the right to a fair trial for detainees

On Tuesday, Kazakhstan’s Interior Ministry said that almost 10,000 people have been arrested since mass unrest and violent clashes between police and protestors. More than 400 criminal cases have already been initiated.

According to the Prosecutor General, most of these criminal cases concern violence, including killings. However, in some cases of which Amnesty is aware, the Kazakhstani authorities have prosecuted peaceful dissent under the vague charge of “incitement of social discord.” This includes the opening of criminal proceedings under these charges in connection with a solitary street picket which environmental activist Artyom Sochnev held in Stepnogorsk on 4 January.

Kazakhstan’s unduly restrictive law governing public assemblies effectively bans any street protest unless expressly permitted by the local authorities. Under this legislation, thousands of Kazakhstanis who took part in peaceful protests in recent days are liable to arrest and fines or up to 15 days of detention.

The risk of torture and other ill-treatment is demonstrated by the case of Vikram Ruzakhynov, a jazz musician from neighboring Kyrgyzstan who was on tour in Kazakhstan. On Sunday, Kazakhstani state TV televised his interrogation, which showed a heavily bruised Ruzakhynov “confessing” to having been recruited by “strangers” to “participate in a protest rally” for money. Ruzakhynov was released on Monday following a diplomatic protest from Kyrgyzstan.

“Sadly, unfair trials remain widespread in Kazakhstan, as does torture and other ill-treatment, while lawyers are often denied access to their clients and are routinely muzzled by non-disclosure orders. One lawyer, Yubzal Kuspan, was arrested and is in detention for 10 days simply for taking part in a peaceful demonstration.”