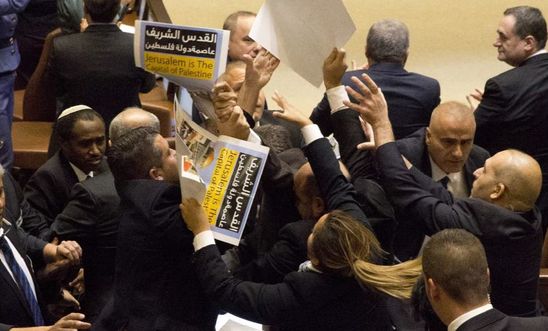 Palestinians elected to Israel’s parliament, the Knesset, are being targeted by discriminatory regulations and legislation, Amnesty International said in a new report today, published ahead of upcoming Israeli elections on 17 September.

Amnesty’s 22-page report - Elected but restricted: Shrinking space for Palestinian parliamentarians in Israel’s Knesset - shows how discrimination is threatening Palestinian members of the Knesset’s right to freedom of expression, leaving unable to properly represent and defend the rights of the Palestinian minority in Israel.

For example, a 2016 legislative amendment which allows members of the Knesset to expel elected MKs by a majority vote, means that MKs who express peaceful political views or opinions deemed unacceptable by a majority of MKs can face expulsion from parliament. One Palestinian MK described this as a “sword dangled over our heads by members of the Knesset who oppose us politically”.

Amnesty also highlights the blatantly discriminatory attitudes and divisive rhetoric employed by Israeli politicians toward Palestinian counterparts. Senior Israeli government officials and Israeli MKs regularly use inflammatory and stigmatising language to describe their Palestinian counterparts to delegitimise them and their work. Palestinian MKs who have dared to criticise Israeli policies have been labelled “traitors” and faced calls to be “outlawed” or tried for “treason”.

Prime Minister Benjamin Netanyahu has said that “Israel is not a state of all its citizens ... it is the nation-state of the Jewish people only”. He claim that Palestinian political parties are attempting to eradicate the state of Israel.

Meanwhile, Knesset regulations over ethical practices are being abused. Last year, two Palestinian MKs were prevented from travelling abroad with funding from NGOs on an Israeli government “blacklist” due to a 2018 amendment to the Knesset’s ethics rules barring travel funded by a body “calling for a boycott of the state of Israel”. While Amnesty does not call for or endorse specific boycotts, it considers the right to advocate or participate in a boycott to be a form of free expression that must be respected and protected by the authorities.

Amnesty’s report also shows that, since 2011, at least four bills related to Palestinians’ rights - including their right to participate in public life - have been disqualified before even reaching discussion in parliament.

“Palestinian members of the Knesset in Israel are increasingly facing discriminatory attacks.

“Despite being democratically elected like their Jewish Israeli counterparts, Palestinian MKs are the target of deep-rooted discrimination and undue restrictions that hamstring their ability to speak out in defence of the rights of the Palestinian people.

“With Israel systematically committing human rights violations against Palestinians in Israel and the Occupied Palestinian Territories, it is vital that Palestinian voices in parliament are heard, considered and respected.

“The Israeli Knesset must urgently repeal or amend all legislation that facilitates discrimination against Palestinian MKs and other Palestinian citizens of Israel, starting with the ‘nation state law’.

“Israeli authorities must end the discriminatory restrictions against Palestinian MKs and ensure their right to freedom of expression is upheld.”

Increasing restrictions faced by Palestinian MKs are part of a pattern of blatant discrimination by Israeli authorities against Palestinian citizens in Israel. Palestinians make up 20% of Israel’s population and although their rights to political participation and representation are recognised by Israeli and international law, in practice they face widespread discrimination - including in terms of citizenship, housing, education and healthcare.

Israel’s “nation state law” (formally known as Basic Law: Israel - The Nation State of the Jewish People), which came into force last year, defines Israel as the nation state of the Jewish people, constitutionally entrenching inequality and discrimination against non-Jews. The law grants the right to self-determination exclusively to Jews, establishes that immigration leading to automatic citizenship is exclusive to Jews, promotes the building of Jewish settlements, and downgrades the status of Arabic from an official language.

In recent years, the Israel authorities have stepped up divisive rhetoric against minorities and marginalised communities, threatening and smearing Palestinian and Israeli human rights activists and civil society organisations, as well as groups like Amnesty.