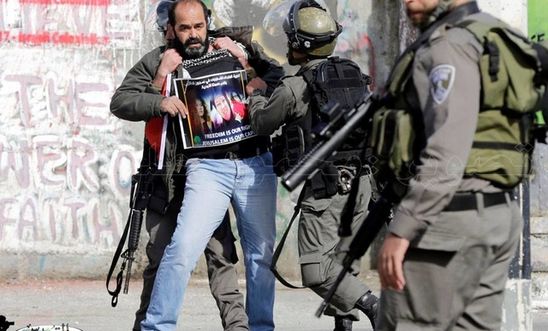 ‘Yet again, the Israeli authorities are responding to peaceful protest with arbitrary imprisonment’ - Magdalena Mughrabi

Amnesty International is calling on the Israeli authorities to release Palestinian prisoner of conscience Munther Amira, who has been sentenced to six months in prison after being arrested at a protest calling for the release of fellow Palestinian activist Ahed Tamimi and Ahed’s mother Nariman.

Mr Amira, who was initially charged with 13 offences, was today convicted on four charges by Ofer military court in the occupied West Bank.

Amira was arrested by Israeli soldiers on 27 December while peacefully participating in a protest in the city of Bethlehem calling for the release of Ahed and Nariman Tamimi.

Amnesty considers Amira - the coordinator of the Popular Struggle Coordination Committee, a community-based group providing legal aid and advocacy support to activists in the Occupied Palestinian Territories - a prisoner of conscience who should be released immediately and unconditionally.

“Yet again, the Israeli authorities are responding to peaceful protest with arbitrary imprisonment.

“Instead of unlawfully punishing Munther and other Palestinians who peacefully challenge the harsh reality of the ongoing occupation, the Israeli authorities must remember their legal obligations as the occupying power. This means respecting and protecting the rights of Palestinians to peacefully express themselves.

“Munther Amira must be released immediately and unconditionally.”