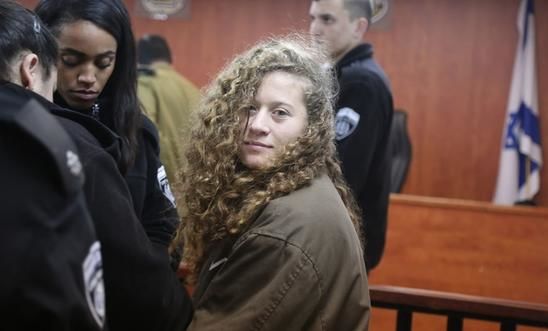 ‘As an unarmed girl, Ahed posed no threat’ - Magdalena Mughrabi

The Israeli authorities must immediately release teenage activist Ahed Tamimi whose continued detention is an attempt to intimidate Palestinian children who dare to stand up to repression by occupying forces, Amnesty International said ahead of her trial tomorrow.

Tamimi, who is due to go on trial in Ofer juvenile military court in the occupied West Bank, faces 12 charges, including aggravated assault, after a video was posted on social media showing her shoving, slapping and kicking two Israeli soldiers in her village on 15 December.

The teenager, who spent her 17th birthday in detention, could receive up to ten years in prison if convicted, and her trial is expected to last several months.

Under the Convention on the Rights of the Child, to which Israel is a state party, the arrest, detention or imprisonment of a child must be used only as a measure of last resort and for the shortest appropriate period of time.

“By refusing to release Ahed Tamimi since her arrest on 19 December, the Israeli authorities have shown nothing but contempt for their obligations under international law to protect children.

“As an unarmed girl, Ahed posed no threat during the altercation with the two Israeli soldiers who were heavily armed and wearing protective clothing. Nothing she has done can justify her continued detention and the long, aggressive interrogation sessions she has been forced to endure during the first two weeks of her detention.

“Yet again, the Israeli authorities have responded to acts of defiance by a Palestinian child with measures that are entirely disproportionate to the incident in question.”

Ahed Tamimi was arrested on 19 December after her mother, Nariman, also a prominent activist, posted footage of the altercation in question online. Nariman was arrested later that day, while Ahed’s cousin, Nour, was arrested the following morning.

Ahed confronted Israeli soldiers amid a demonstration - against US President Trump’s recognition of Jerusalem as Israel’s capital - in the small village of Nabi Saleh, north-west of Ramallah in the occupied Palestinian West Bank. The incident took place on the same day that Ahed’s cousin, 15-year-old Mohammad, sustained serious injuries after being hit in the head by a rubber bullet fired at close range by an Israeli soldier.