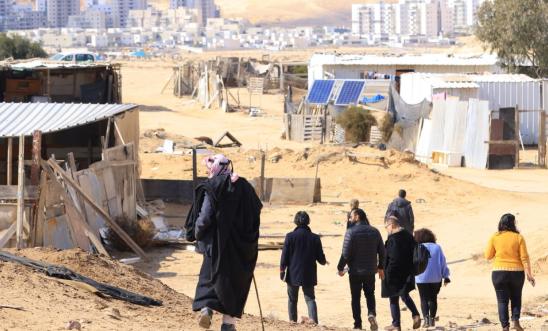 Israeli authorities are expanding nearby town of Dimona, home to mostly Jewish Israelis

The Israeli authorities must scrap plans to demolish a Palestinian Bedouin village and forcibly transfer its residents to a segregated Bedouin-only town, said Amnesty International.

Today and tomorrow, the Beersheba Magistrate’s Court will hear an appeal submitted by 127 residents of the Negev/Naqab village Ras Jrabah who are at imminent risk of forced eviction and displacement, in the latest example of the Israeli authorities seeking to maintain and expand a crushing system of apartheid against Palestinians.

Village residents are being represented by lawyers from the human rights group Adalah, who argue that planned demolitions also perpetuate Israel’s policies of racial segregation.

Israeli authorities do not officially recognise Ras Jrabah, and its 500 residents are cut off from essential services. Israel’s Land Authority plans to demolish the village to expand the nearby town of Dimona, which is mostly home to Jewish Israelis, and in 2019 it issued eviction orders to 129 residents. The Israeli authorities intend to move and resettle the residents of Ras Jrabah to the nearby Bedouin village of Qasr al-Sir. Although the Israeli authorities recognise this village, Qasr al-Sir residents remain excluded from the state’s development plans, making it difficult for them to acquire building permits or receive state services and infrastructure.

Amnesty visited Ras Jrabah in January this year and heard how residents fear their community would have to split up to fit into the planned zones of Qasr al-Sir. Adalah lawyer Myssana Morany told Amnesty that in governance terms the Bedouin are separated from Jewish citizens of Israel and that a municipal plan to expand Dimona will not include the Bedouin.

“We can’t move to a different place. Our whole lives are based here, in this location … Everyone in the village is nervous about the courts, and we are preparing ourselves as best we can.”

Since 2019, three newly-built homes have been demolished in Ras Jrabah, according to Adalah lawyer Marwan Abu Frieh.  Residents of “unrecognised villages” (see below) are unable to apply for building permits to legalise their homes or to build new ones, which means they are considered illegal and are under constant threat of demolition.

“This eviction plan is steeped in the cruelty of apartheid.

“Five hundred people are at risk of losing the only homes they have ever known and being forcibly transferred to an impoverished new location, where they will be separated from the Jewish Israeli population.

“Across Israel and the OPT, displacement is a key strategy used to dominate the lives of Palestinians living under Israel’s system of apartheid. There is no alternative to international justice in the face of Israel’s continued discriminatory policies and practices and the complicity of Israeli courts in their establishment.

“The Israeli authorities must cancel all eviction and demolition orders in Ras Jrabah, and immediately grant legal recognition and status to all unrecognised villages in the Negev/Naqab.”

In June 2013, the Israeli Knesset approved the Law for Regularising Bedouin Habitation in the Negev, or what is also known as the Prawer-Begin Bill, to “regularise” the land and housing question, including the 35 unrecognised Bedouin village in the Negev/Naqab through their forcible transfer in the area. Although the law was shelved in 2013 after a campaign to which Amnesty contributed, the Southern Directorate of Land Law Enforcement, established under the Prawer-Begin Bill, continues to enforce land and planning laws in Bedouin localities, and coordinates home demolitions with other enforcement bodies, including the Israel police. In 2005, the Israeli government adopted the Negev Development Plan which aimed to increase the Jewish population in the region from 535,000 to 900,000 by 2015. House demolitions in Bedouin villages have accelerated, with intensified legal efforts to take over Bedouin land by declaring it state land.

The non-recognition of Bedouin villages is central to Israeli policies of segregation and urbanisation of the Bedouin and to the Israeli denial of Bedouin traditional way of life in the Negev/Naqab. For decades, Bedouins in the Negev/Naqab have struggled to gain ownership and recognition of their villages by Israeli authorities. Israeli authorities have enforced home demolitions, forced evictions, and other punitive measures disproportionately against Bedouins as compared with Jewish citizens of Israel not conforming to planning laws in the Negev/Naqab.

When the state of Israel was established, Ras Jrabah and 45 others became effectively invisible on zoning maps and in state development policies. The Israeli authorities refuse to provide “unrecognised villages” with essential state services, and they are cut off from the water network and electricity grid. Residents of unrecognised villages also struggle to access adequate healthcare and education.

Across Israel and the Occupied Palestinian Territories - including in the Naqab/Negev - the Israeli authorities have employed a set of interrelated discriminatory policies and practices that have directly caused the displacement and dispossession of Palestinian communities, created unbearable living conditions for Palestinians that have coerced their displacement, or put them at high risk of forced displacement, amounting to a state-sanctioned policy of forcible transfer of population. These policies have been carried out in a widespread and systematic manner, combined with violent acts.

Israel’s discriminatory state policies, regulations and conduct against Palestinians have involved the crime against humanity of deportation or forcible transfer in violation of fundamental rules of international law as provided in the Rome Statute, as well as denying to members of a racial group the right to freedom of movement as prohibited in the Apartheid Convention.