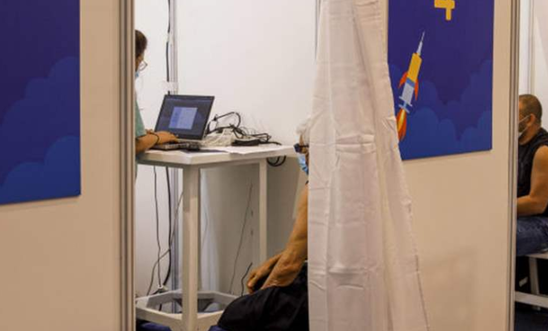 The Israeli government must stop ignoring its international obligations as an occupying power and immediately ensure that COVID-19 vaccines are equally and fairly provided to Palestinians living under its occupation in the West Bank and the Gaza Strip, said Amnesty International.

Having given initial vaccines to more than a 10th of its population, Israel has been hailed as the country that has to date achieved the widest vaccination coverage in proportion to its population size.

However, Israel’s vaccine roll-out plan so far covers only Israeli citizens - including Israeli settlers living inside the West Bank - and Palestinian residents of Jerusalem. It excludes the nearly five million Palestinians in the West Bank and Gaza Strip. The Israeli Ministry of Health has not yet publicly formulated an allocation policy that includes reserving specific amounts of doses for Palestinians in the occupied territories, nor has it established a timeline for the disbursement of these vaccines to Palestinian health authorities.

As of 3 January, according to the World Health Organisation, 159,034 Palestinians in the occupied territories, including East Jerusalem, have so far tested positive for coronavirus since the first confirmed case was reported last March. There have been nearly 1,600 deaths related to COVID-19 among Palestinians since the beginning of the pandemic.

Israel’s obligations under international humanitarian law include a duty to maintain “public health and hygiene in the occupied territory, with particular reference to the adoption and application of the prophylactic and preventive measures necessary to combat the spread of contagious diseases and epidemics” (Article 56 of the Fourth Geneva Convention).

On 22 December, ten human rights and health organisations issued a statement calling on Israel to ensure its vaccinations included Palestinians living under its occupation.

“While Israel celebrates a record-setting vaccination drive, millions of Palestinians living under Israeli control in the West Bank and the Gaza Strip will receive no vaccine or have to wait much longer - there could hardly be a better illustration of how Israeli lives are valued above Palestinian ones.

“Israeli authorities must ensure that vaccines are equally provided to the Palestinians living under their control, in order to meet their obligations under international law.”

In early December, Israel reached an agreement with the Pfizer pharmaceutical company to supply eight million doses of its newly-approved COVID-19 vaccine - enough to cover almost half of Israel’s population of nearly nine million (with each person requiring two doses). Israel also reached a separate agreement with Moderna to buy six million doses of its vaccine - enough for another three million people. Reports indicate that the first batch of 313,000 COVID-19 vaccine doses arrived in Israel in early December, and the country was expected to receive 3.8 million additional doses by the end of the same month.

On 3 January, the Israeli Health Ministry said that 435,866 people in Israel had so far tested positive for coronavirus since the first confirmed case was reported in February 2020. Almost 3,400 people have died from COVID-19 in Israel, it said.

As the Palestinian authorities in the West Bank and de facto Hamas administration in the Gaza Strip cannot independently fund vaccines and their distribution among the Palestinian population, they depend on global cooperation mechanisms such as the WHO-led COVAX programme, which still has not begun distributing vaccines.

Israel must provide full financial support to ensure that the vaccine is promptly distributed to the Palestinian population without discrimination. Israel must also lift the blockade on the Gaza Strip to enable the proper functioning of its health system in the face of the pandemic. Gaza’s health care system - subjected to half a century of occupation and more than a decade of blockade - is already unable to meet the needs of its population.