Israel: barring of US Congress members is suppression of legitimate criticism 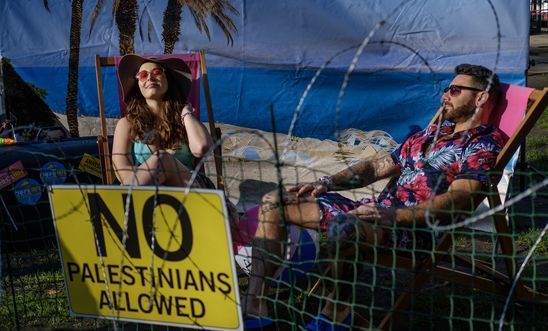 Israel's illegal settlements on Palestinian land have forced tens of thousands of Palestinians from their homes, land and livelihoods © Jon Cornejo/Amnesty

‘Israel proudly embraces leaders … such as Hungary’s Orbán or Brazil’s Bolsenaro, but automatically calls anti-Semitic anyone who dare criticise it’ - Molly Malekar

Responding to the Israeli Prime Minister Benjamin Netanyahu and Israel’s Minister of Interior Arye Deri denying entrance today to the country to two US members of Congress - Ilhan Omar and Rashida Tlaib - as well as tweets in which US President Donald Trump said Omar and Tlaib “hate Israel and all Jewish people”, Molly Malekar, Amnesty International Israel’s Director, said:

“The Israeli government allows free entry to world leaders accused of gross violations of human rights, war crimes, and crimes against humanity - such as Myanmar’s generals and Duterte of the Philippines.

“Israel proudly embraces leaders identified with supporting neo-Nazi and anti-Semitic groups, such as Hungary’s Orbán or Brazil’s Bolsenaro, but automatically calls anti-Semitic anyone who dare criticise it.

“Israel bars entry on the basis of political views to those who critique it. Criticising Israel’s policies isn’t violence.”

“Donald Trump continues a pattern of divisive rhetoric that inflicts great harm on those standing up for their basic rights.

“Free speech is a basic human right. Opposition to a government’s policies or abhorrence to grave human rights abuses is neither anti-Semitism nor a hatred towards a country or its people. We expect all people who support human rights to stand up and speak out against abuses, wherever they occur.”

Amnesty Israel and Amnesty USA have been calling for an end to illegal settlements, an end to unjustly detaining Palestinian activists including children, and for respect for the rights to freedom of movement and expression in Israel and the Occupied Palestinian Territories.

Israel’s “anti-boycott law” of 2011 - formally known as the Law for Prevention of Damage to State of Israel through Boycott - makes it a civil wrong to call for a boycott of any entity because of its affiliation to Israel or to a territory under its control, including entities operating in illegal settlements in the Occupied Palestinian Territories.

A 2017 amendment to the Entry to Israel Law prohibits granting an entry visa to Israel (and therefore to the Occupied Palestinian Territories which are under Israeli control) to anyone who knowingly published - or operates within an organisation who knowingly published - a call for a boycott as defined under the 2011 law. Both these laws contravene Israel’s obligations under international human rights law.

Amnesty does not take a view on the Boycott, Divestment and Sanctions campaign and has never called for or endorsed specific boycotts. It is up to individuals and organisations to determine which peaceful strategies to use in furtherance of human rights. Advocating boycotts, divestment and sanctions is a form of free expression that must be protected. Advocates of boycotts should be allowed to express their views freely and take forward their campaigns without harassment, threats of prosecution or criminalisation, or other measures that violate the right to freedom of expression.