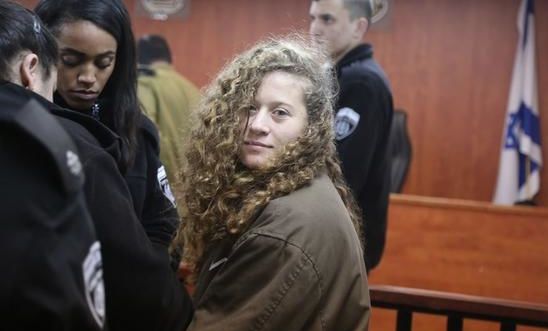 ‘This is a day of relief, which we hope will blossom into happiness once this brutal military occupation is out of our lives’ - Bassam Tamimi

The release of the jailed Palestinian teenage activist Ahed Tamimi today (29 July) is welcome news but the case is a reminder of Israel’s ongoing human rights violations against Palestinian children, said Amnesty International in response.

Tamimi was convicted of incitement, aggravated assault and obstructing Israeli soldiers after a video showing her shoving, slapping and kicking two Israeli soldiers in her home village of Nabi Saleh on 15 December 2017 went viral on Facebook.

She was arrested on 19 December after her mother Nariman Tamimi, also a prominent activist, posted footage of her altercation with Israeli soldiers online. Nariman Tamimi was also released today, after herself being sentenced to eight months in prison on similar charges. The video shows that the Israeli soldiers - who were standing on the edge of the family’s walled front garden and armed with assault rifles and wearing protective gear - were able to easily swat away Tamimi’s slaps and kicks.

Ahed Tamimi’s father, Bassam, told Amnesty that despite his family’s happiness in welcoming his daughter and wife back home, he was still worried about his son, Wa’ed, who was arrested in May. The 22-year-old has been detained in Ofer military prison and is facing charges related to his activism against the occupation.

“This is a day of relief, which we hope will blossom into happiness once this brutal military occupation is out of our lives.

“My son is still in Israeli prison for the duration of military court proceedings against him, which is a reminder that Israel’s occupation is always seeking to punish us because our existence contradicts the existence of the occupation.

“And so, I call on members of the international community to uphold their responsibility towards our people and take concrete steps to end this perpetual injustice.”

“While Ahed’s freedom is welcome and long overdue, it must be followed by the release of the other children unlawfully imprisoned by Israeli military courts.

“Ahed Tamimi has been released, but only after serving an unjust sentence based on the ridiculous premise that she posed a threat to armed and heavily-protected soldiers.

“The reality is that she was imprisoned in a blatant attempt by the Israeli authorities to intimidate those who dare to challenge the ongoing brutal repression by occupying forces.

“This is a huge relief for Ahed Tamimi’s loved ones, but their joy will be tempered by the injustice of her imprisonment and the grim knowledge that many more Palestinian children still languish in Israeli jails, many despite not having committed any recognisable crime.

“Ahed Tamimi’s release must not obscure the familiar and continuing story of the Israeli military using discriminatory policies to lock up Palestinian children. Her unjust imprisonment is a reminder of how the Israeli occupation uses the arbitrary military courts to punish those who challenge the occupation and illegal settlements expansion policies, without any regard to age.

“Hundreds of Palestinian children continue to face the harsh conditions and abuse of the Israeli penitentiary system that flouts the principles of juvenile justice and standards for the treatment of prisoners.”

Tamimi family and the village of Nabi Saleh

Ahed Tamimi confronted the soldiers on 15 December amid a demonstration in her home village of Nabi Saleh against Donald Trump’s decision to recognise Jerusalem as the capital of Israel. The incident took place on the same day that one of Ahed’s cousins, 15-year-old Mohammad Tamimi, sustained serious injuries after he was hit in the head at close range by a rubber bullet fired by an Israeli soldier.

Nabi Saleh, north-west of Ramallah in the occupied West Bank, has since 2009 been the scene of regular Friday protests against Israeli military occupation, the theft of its land and the loss of the community’s water source. The Israeli army routinely uses excessive force against protesters and bystanders and has in many cases deliberately damaged private property. Since 2009, three residents have been killed by Israeli soldiers, and others have suffered injuries caused by live ammunition, rubber-coated metal bullets and tear gas.