Ireland: abortion referendum is historic opportunity to vote for equality and end the 'exile of women' 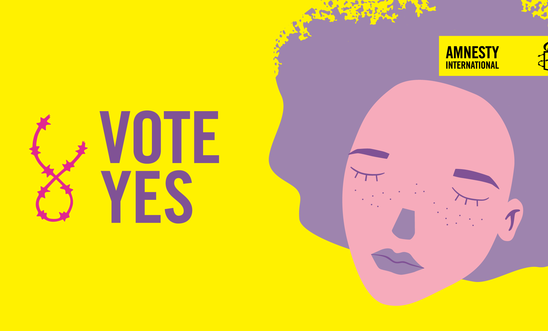 On Friday (25 May), Ireland will have a once in a generation opportunity to right a historic wrong and give Irish women the right to decide what happens to their bodies, Amnesty International said today ahead of this week’s referendum on abortion.

The long fought-for referendum will give Irish people a chance to vote to remove a constitutional provision which bans abortion in all circumstances other than where there is a risk to the life of the pregnant woman. The provision, known as the Eighth Amendment, has meant that Ireland’s abortion law is amongst the most restrictive in the world.

“On Friday, we have a historic opportunity to change Ireland’s Constitution and remove the restrictions that have caused untold suffering to countless women and girls. This opportunity must not be missed.

UK government must not leave women in Northern Ireland behind

Regardless of the outcome of Friday’s vote, women and girls over the border from the Republic of Ireland in Northern Ireland will still be restricted by some of the most suffocating abortion laws in the world, which also carry the harshest criminal penalties in Europe.

The law in Northern Ireland dates back to 1861 and makes abortion illegal in almost every circumstance – including cases of rape or fatal foetal abnormality. Hundreds travel every year to other parts of the UK for abortion services and many others go online to procure abortion pills, risking prosecution for doing so.

The UK government has the power and responsibility to bring Northern Ireland abortion law in line with human rights standards and ensure that women and girls who live there are entitled to the same levels of care, dignity and respect as every other woman and girl in the rest of the UK.

“Many people in Northern Ireland have campaigned with our southern sisters and friends. We have everything crossed in hope that Friday’s vote will be a yes for equality and respect.

"It's also important that we acknowledge that not all women on the island have this chance for change. It's vital that no woman on the island of Ireland is left behind.

“We cannot continue with a situation that treats women in Northern Ireland as second-class citizens.

“It is time that Westminster stood with women in Northern Ireland and brought about long overdue reform.”

The past three decades have shown that the Eighth Amendment has not stopped the need for abortion services in Ireland: