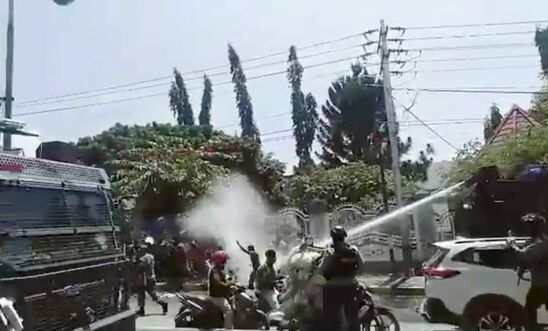 One man was shot, while three others were called ‘monkey’ by security forces

Papuan protesters told how they were targeted with water cannons, kicked and punched, and beaten with guns and rubber batons in peaceful protests during the last month. At least one person was injured after security forces opened fire on protesters on 16 August. Three protesters reported being called “monkey” while being arrested during protests in July.

“The Indonesian security forces’ excessive use of force and racial abuse towards peaceful Papuan protesters is abhorrent.

“The reports of assault – both physical and verbal – that we have gathered reveals the true contempt the security forces have for the rights of Papuans.

“The Indonesian authorities must immediately investigate the reports of use of discriminatory excessive force and racial abuse against protesters, and also ensure the right to freedom of expression and peaceful assembly is respected.”

To date, protests against the controversial renewal of the Papua Special Autonomy Law have taken place in several cities, from July 14 to August 16. The protests have also called for the release of Victor Yeimo, a pro-independence activist from Papua facing life imprisonment for his political views.

Amnesty interviewed 17 people who participated in protests in the cities of Jakarta, Jayapura, Sorong and Yahukimo, and verified their accounts using open source video footage.

On August 16, security forces opened fire on protesters in Yahukimo, injuring one person. One protester told Amnesty he heard multiple gunshots, and that several bullets were also found close to where the protest took place.

One student who took part in a protest in Jakarta on July 15 told Amnesty that security forces beat and racially abused him before he was arrested.

He said: “I was dragged down and taken far from the action, then I got punched, about seven times. When I tried to escape, the police pulled me in and stepped on me, on my shoulders and thighs, and called me ‘monkey’. I had to cover my face with my hands to protect from kicks. Then, I was arrested and pulled in the truck.”

Two other protesters in Jakarta told Amnesty that security forces also called protesters “monkey” while pushing them into police trucks.

A protester in the demonstration in Sorong on July 19 told Amnesty that police officers beat him as he was arrested.

He said: “I was kicked in the stomach and on my head. I was arrested because I only asked the National Police Chief for help to free the protesters who were arrested by the police.”

The arrest and beating were corroborated by another protestor and video footage.

A protester in Sorong criticized the excessive use of force by security forces.

He said: “They just want us Papuans not to speak out about our rights. That's why every time we take action, it's always forced to disband like that.”

Protests initially began against the decision of the Indonesian House of Representatives to renew the Special Autonomy Law for Papua and West Papua provinces. Protesters have also highlighted the Indonesian government’s ongoing racial discrimination against Papuans, and called for the right to self-determination.

The Papua Special Autonomy Law was adopted in 2001. The law was intended to give the Papuan people more powers to govern themselves while remaining part of Indonesia, in response to calls for Papuan self-determination.

The new Special Autonomy Law introduces changes that strengthen the authority of central government and reduces the autonomy of Papuan institutions. The new law creates a special agency responsible for coordinating and evaluating the implementation of Special Autonomy, chaired by the Indonesian Vice President and with an office in the region. The new law also removes the right of the Papuan population to form local political parties.

“The protests against the renewal of the Special Autonomy Law shows the failure of the Indonesian government to adequately consult with the Papuan indigenous people.

Amnesty does not take any position regarding the political status of any province in Indonesia. However, we uphold human rights, including the rights to freedom of expression and peaceful assembly, which safeguard the right to voice political opinion or views, as long as they do not advocate hatred, discrimination or violence.