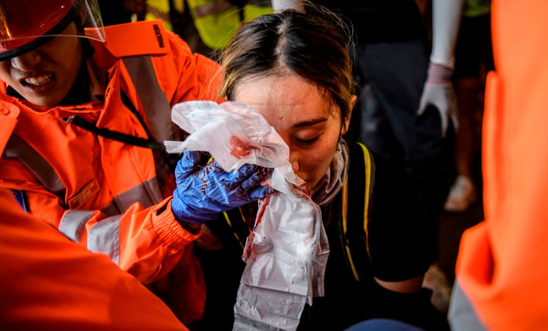 Amnesty International is calling on Hong Kong police to exercise restraint after a violent reaction to weekend protests where rounds of tear gas and rubber bullets were fired on the city’s streets.

“Hong Kong police have once again used tear gas and rubber bullets in a way that has fallen short of international standards.

“Firing at retreating protesters in confined areas where they had little time to leave goes against the purported objective of dispersing a crowd.

“The Hong Kong police have once again demonstrated how not to police a protest. Violence directed at police does not give officers a green light to operate outside of international policing standards.

“Any heavy-handed policing approach will only increase tension and provoke hostility, leading to the overall escalation of the situation.”

Use of tear gas and pepper ball projectiles

According to media reports, one protester suffered a ruptured eye after being shot by what appeared to be a bean bag projectile police deployed in the Tsim Sha Tsui district. Police also fired multiple rounds of tear gas and pepper ball projectiles inside a train station in the Kwai Fong and Taikoo districts, sometimes aiming at protesters’ heads and upper bodies.

Tear gas should not be used in confined spaces or where exits are blocked or restricted. Tear gas, rubber bullets and pepper ball projectiles can cause serious injury and are potentially lethal. They should never be fired directly at anyone, and should not be fired at all when visibility is poor. When such weapons are deployed, it must be in strict compliance with the principles of legality, necessity and proportionality.

Amnesty is calling on all governments to suspend transfers of “crowd control” equipment to Hong Kong until a full and independent investigation is carried out, and adequate safeguards are put in place.