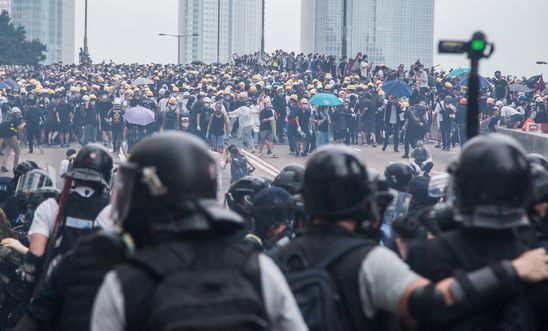 In response to the shooting of two protesters by police during demonstrations in Sai Wan Ho on the morning of 11 November, Man-Kei Tam, Director of Amnesty International Hong Kong, said:

“Today was another shocking low for the Hong Kong police. The live rounds fired by police are clear evidence of reckless use of force. Another policeman was seen driving at high speed into a group of protesters on a motorbike. These are not policing measures – these are officers out of control with a mindset of retaliation.

“This pervasive, heavy-handed behaviour shows the police cannot investigate themselves. Today’s actions again require an urgent independent investigation. The authorities must review their approach to help de-escalate the situation and prevent more lives being put at risk.

“Police officers like the one seen shooting an apparently unarmed protester at point-blank range must be suspended immediately. Likewise, the police officer on a motorbike was clearly behaving in a reckless, arbitrary way. These behaviours call their training in question and the commands they have been given – officers should be deployed to de-escalate difficult crowd control situations, not make them worse.”

Three live rounds were fired in Sai Wan Ho on the morning of 11 November. At least two protesters were shot and hospitalized, including one 21-year-old protester now in critical situation. On the same day, another police officer on a motorcycle was filmed driving at high speed into a group of protesters.

Amnesty International has repeatedly documented the shortcomings in the Hong Kong police’s current policing methods and called for an independent and effective investigation into the use of force by the police since the start of the Extradition Bill protests in June. This includes allegations of torture and other ill-treatment in detention.

On 8 November, a panel of overseas experts appointed by the Independent Police Complaints Council (IPCC) said IPCC lacks powers, capacity and independent investigative capability necessary to match the scale of the recent protests and the standards internationally required of a police watchdog operating in a city that values freedoms and rights.