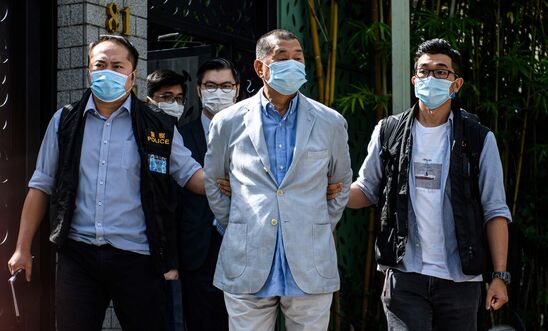 “The wrongful prosecution, conviction and sentencing of these activists underlines the Hong Kong government’s intention to eliminate all political opposition in the city.

“Having arrested the majority of Hong Kong’s most prominent dissidents using the repressive national security law, the authorities are now mopping up remaining peaceful critics under the pretext of bogus charges related to the 2019 protests.

“These convictions are a violation of international law, which states that participating in and organising peaceful assemblies does not require prior permission by the state. Nor does failure to notify the authorities about an assembly make it unlawful to take part in it. The prosecution’s case against these activists is simply not tenable.

“The Hong Kong authorities must stop bringing unwarranted criminal charges against those who have peacefully exercise their rights to freedom of expression and assembly. All those sentenced today should be immediately released and their record expunged.”

This morning, nine pro-democracy activists were sentenced to between eight and eighteen months in prison for organising and participating in an “unauthorised” protest on 18 August 2019.

Three of those sentenced today - newspaper owner Jimmy Lai and former lawmakers Au Nok-Hin and Leung Kwok-hung - are also facing prosecution under Hong Kong’s national security law, which has been used to systematically crack down on human rights. Lai was handed an additional charge under the national security law during today’s hearing.

The series of mass protests was triggered by the so-called ‘Extradition Bill’ proposed earlier that year. As protests against the bill became more frequent and larger in 2019, the Hong Kong police adopted a tougher approach to restricting public assemblies, ranging from revoking “notices of no objection” for marches to banning protests outright on the grounds of “public security concerns”.

An estimated 1.7 million people took part in a peaceful march on 18 August 2019, defying police orders to confine the gathering to a stationary rally in Victoria Park near the city centre. Hundreds of thousands of people again took to the streets on 31 August, defying a total ban by the police and despite organisers calling off the protest. The latter demonstration was largely peaceful but ended in clashes between police and protesters, some of whom threw bricks and petrol bombs.

These prosecutions are based on the Public Order Ordinance, the provisions and application of which fail to meet international human rights law and standards on the right to peaceful assembly. The UN Human Rights Committee has repeatedly expressed concern that the application of “unlawful assembly” against Hong Kong protesters risks violating their human rights.

International human rights law stipulates that anyone who wishes to hold a demonstration should be able to do so without requiring permission or authorization from the authorities.

Amnesty has called for relevant provisions of the Public Order Ordinance to be amended to bring it in line with Hong Kong’s obligations under international human rights law.