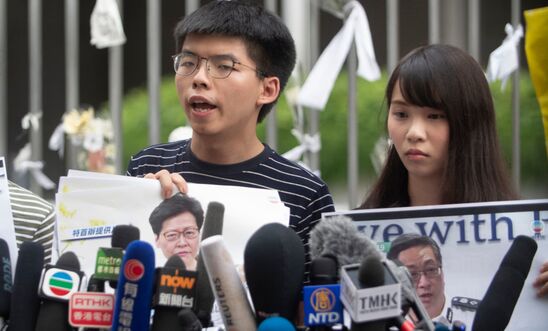 Notable activist Joshua Wong was one of those disqualified © © 2019 Stephen J. Boitano

“This mass disqualification appears to be a concerted effort specifically targeting candidates who advocate viewpoints at odds with those of the government.

“This move is likely to intensify the climate of fear and tension in Hong Kong, where opposition figures, their supporters, activists on the streets and even ordinary people have been forced to self-censor their political discourse to avoid being targeted under the city’s new National Security Law.

“For all the Hong Kong government’s insistence that these decisions do not restrict ‘freedom of speech’, its actions reek of political repression. These disqualifications appear to be arbitrary, given that the authorities’ own justification makes clear their intention to punish peaceful criticism and advocacy of opposing views.”

Among the disqualified candidates is prominent opposition figure Joshua Wong, as well as several incumbent lawmakers and young activists who secured the most votes in the pro-democracy “primaries” last month.

The Hong Kong government today issued a statement on the disqualifications in which it said there is “no question of any political censorship, restriction of the freedom of speech or deprivation of the right to stand for elections as alleged by some members of the community”.

At the same time, it cited advocating for Hong Kong independence, soliciting intervention by foreign governments, and objecting to the recently-enacted National Security Law in principle as reasons that lawmakers “could not genuinely uphold” their constitutional duty.

The rights to freedom of expression and association, equality before the law, and the right not to be discriminated against on the grounds of political opinion are guaranteed by the International Covenant on Civil and Political Rights, which is enshrined in Hong Kong’s Basic Law, the city’s de facto constitution.