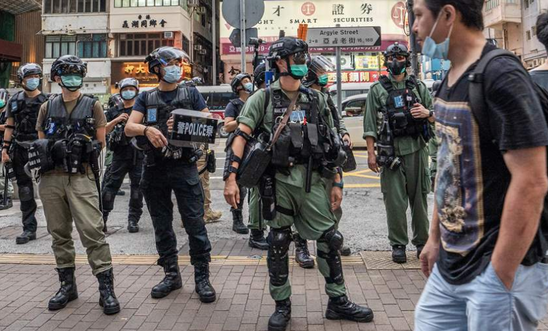 “This first coordinated police operation to enforce Hong Kong’s national security law is a significant and alarming moment for the right to freedom of expression in the city.

“According to police statements, all those detained have been targeted solely for peacefully expressing their views. It is also worrying that the authorities stressed their investigative power over ‘offences’ outside Hong Kong.

“That four young people could potentially face life imprisonment on the basis of some social media posts lays bare the draconian nature of the national security law. The idea that anybody can now be jailed for expressing their political opinion on Facebook or Instagram will send a chill throughout Hong Kong society.

“International human rights laws do not allow states to restrict all peaceful expression in the name of national security. No-one should be arrested solely for expressing an opinion that is contrary to that of the government.

“The Hong Kong authorities must stop using national security as a pretext to excessively restrict freedom of expression and other human rights.”

Hong Kong police said yesterday that four activists (three male and one female) aged 16 to 21 had been arrested under Articles 20 and 21 of the security law after they “recently declared the establishment of (overseas) organisation(s) that advocate(s) Hong Kong independence”.

The four students were previously members of the pro-independence group Studentlocalism, which publicly announced the dissolution of its Hong Kong branch the day before the security law was enacted on 30 June. At the same time, it founded a US branch for overseas members.

A group called the ‘Initiative Independence Party’, reportedly founded by former Studentlocalism members now residing outside Hong Kong, posted a declaration announcing its establishment on its Facebook and Instagram pages on 21 July.

Computers, phones and documents were seized in police raids on the home of Studentlocalism’s former leader Tony Chung and at least one of the other students on Wednesday.

The national security law criminalises acts of “separatism, subversion, terrorism and collusion with foreign or external forces”, with offences punishable by a minimum sentence of three years and a maximum of life imprisonment. The law also asserts jurisdiction over alleged offences committed outside Hong Kong.

Under the law, the authorities can also compel arrested individuals to answer questions, even if the information in question may be self-incriminating. This essentially removes a person’s right to silence, an essential component of the presumption of innocence and fair trial.