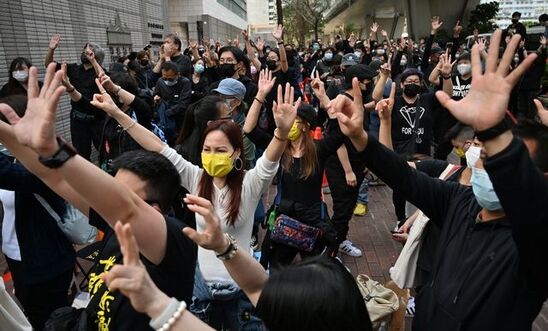 A court in Hong Kong has denied bail to 32 out of 47 pro-democracy politicians and activists, in the biggest mass prosecution since the city’s national security and criminal law came into effect last June.

In a case described by Amnesty International as “unprecedented attack on freedom of expression in Hong Kong”, the pro-democracy figures are charged with “conspiracy to subversion” over their organisation and participation in a self-proclaimed primary for last year’s Legislative Council election, an event later postponed over COVID-19 fears.

Earlier today, Hong Kong’s West Kowloon Court also ordered the remaining 15 defendants to be remanded in custody pending an appeal by the Department of Justice set to be heard in the next 48 hours.

Hearings in the case lasted for four days as the court struggled to process the unprecedented mass arraignment. One defendant, Clarisse Yeung Suet-ying, fainted at around 1.45am on Tuesday towards the end of a lengthy first-day session. International standards state that excessively long and exhausting hearings impede the right to a fair trial. During the proceedings, hundreds of protesters who had congregated to voice support for the defendants were told by the police that they were conducting an illegal gathering, while one of the defendants’ lawyers was arrested.

Pro-democracy activists conducted polls last July to narrow a final list of candidates to run in the official legislative polls with the aim of securing a majority in the next Legislative Council. At the time, Hong Kong Chief Executive Carrie Lam claimed the polls were illegal, saying they could be in breach of a national security law enacted weeks earlier.

Amnesty is calling for all those targeted in the case to be released immediately, and for all the charges against them to be dropped.

“This is an unprecedented attack on freedom of expression in Hong Kong, and the four-day hearing in gruelling conditions of long hours, and no facilities to prepare a defence casts grave doubts over the fairness of the trial.

“The activists and pro-democracy politicians have fallen victim to a national security law that deems people a ‘threat’ simply for the peaceful expression of political views.

“These charges are based entirely upon claimed hypothetical threats to national security.

“This trial signals the government’s intention to close off any space for meaningful political participation in Hong Kong and discourage any future such activities.

“The hundreds of protesters who gathered near the court to defiantly voice support for those prosecuted shows that Hong Kong civil society will not be silenced by repression, despite government efforts to completely stamp out dissent.”