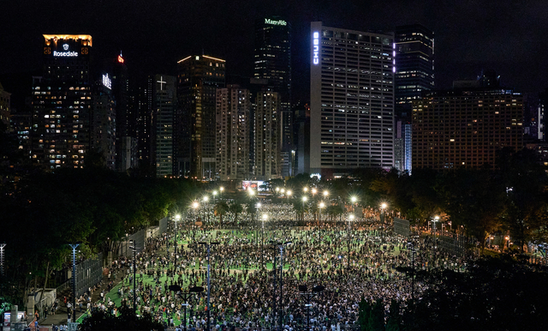 The Hong Kong authorities must allow people to peacefully pay their respects to those killed in the Tiananmen crackdown, Amnesty International said ahead of tomorrow’s anniversary of the 1989 atrocity.

Hong Kong’s annual Tiananmen vigil on 4 June has been banned on Covid-19 grounds for the second year running, but thousands are still expected to mark the event. Twenty-four activists who participated in last year’s peaceful vigil have since been arrested, and some have been jailed.

Every year since 1990, tens - and sometimes hundreds - of thousands of people have joined a candlelight vigil on 4 June in Hong Kong’s Victoria Park to remember protesters killed by Chinese troops in and around Beijing’s Tiananmen Square in 1989.

Media reports have suggested that people who try to attend the vigil this year could be arrested for illegal assembly, face sentences of up to five years in jail, and be barred from voting in elections. Some pro-Beijing figures have said participation could violate the city’s draconian national security law, adopted shortly after last year’s cancelled vigil.

Last year, the authorities arrested 24 people for taking part in the “unauthorised” vigil, and four people - Joshua Wong, Lester Shum, Tiffany Yuen and Jannelle Leung - have since been given jail sentences. Twenty more - including newspaper owner Jimmy Lai and several members of vigil organisers, the Hong Kong Alliance - face trial later this month for participating in the event.

An annual 4 June vigil in neighbouring Macau has also been banned for the second successive year. The authorities there - who prohibited last year’s event solely due to Covid-19 concerns - have this year said the gathering would “incite subversion”.

“Once again, the Hong Kong authorities are using Covid-19 as a pretext to muzzle the rights to freedom of expression and peaceful assembly.

“For 30 years, Hongkongers have come out in support of the right to peaceful protest in mainland China. Now they are being denied that right themselves.

“People must not be punished for the simple act of lighting a candle in memory of the victims of the Tiananmen crackdown.

“The arrests and convictions of those who took part in last year’s vigil - which was socially-distanced and entirely peaceful - has been a violation of international law. This travesty of justice must not be repeated.

“The Hong Kong authorities must allow people to peacefully mark the horrific events of June Fourth, and they must end their politically-motivated prosecutions against those targeted for attending last year’s vigil.”

On the evening of 3-4 June 1989, hundreds - possibly thousands - of people were killed in Beijing when troops opened fire on students and workers who had been peacefully calling for political and economic reforms as well as an end to corruption. An unknown number of people were killed or jailed in similar crackdowns throughout the country. No-one knows the exact number of fatalities as the Chinese authorities having censored discussion of the crackdown ever since.