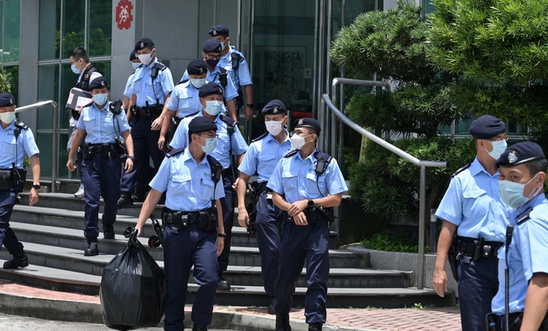 “With this latest brazen attack on one of its fiercest media critics, the Hong Kong authorities are ramping up their crackdown on press freedom and using the pretext of ‘national security’ to justify it.

“Use of the content of Apple Daily media articles as grounds for arrest under the national security law is deeply disturbing and could have profound implications for all media outlets operating in Hong Kong.

“The protection of journalistic materials is crucial to enabling the media to expose wrongdoing without fear of retribution.

“Once again ‘national security’ is being used as a catch-all to silence critics in Hong Kong.

“All the media workers arrested today solely for doing their legitimate journalistic work must be immediately released. Journalism is not a crime.”

According to a Hong Kong Police spokesperson, the five were arrested for their role in the publication of more than 30 articles that called on foreign countries to impose sanctions. All were charged with “colluding with a foreign country or with external elements to endanger national security” under Hong Kong’s controversial National Security Law. Since its enactment in June 2020, at least 113 people have been arrested under the law.

Steve Li Kwai-wah, the senior superintendent of the police national security department, cited the International Covenant on Civil and Political Rights (a core UN human rights treaty binding on Hong Kong), which he said allows for restrictions of “freedom of press and publication” on grounds of national security.

Last August, Apple Daily’s founder, Jimmy Lai, was arrested and charged under the National Security Law on the same day as another police raid on Apple Daily’s offices. The authorities have also frozen HK$18 million (£1.65 million) of assets owned by companies linked to Apply Daily.