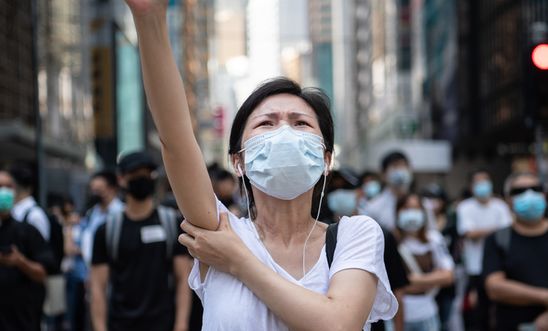 “Today’s excessive and indiscriminate use of force by the police to disperse protesters once again exposes the authorities’ utter disregard for human rights on the streets of Hong Kong. Mass arrests in entirely peaceful assemblies show that the Hong Kong government is targeting anyone exercising their right to freedom of expression.

“As rights in Hong Kong come under ever increasing threat, the national anthem bill is another attempt to make peaceful dissent a crime in the city. Under this vaguely worded and repressive law, people in Hong Kong could face up to three years in prison if they are deemed to have ‘insulted’ or ‘misused’ China’s national anthem.

“Hongkongers are right to be alarmed by this bill and perfectly entitled to peacefully protest against it. At a time when Hong Kong’s freedoms face being severely undermined by a national security law forced on it by China, the national anthem bill is yet another grave threat to freedom of expression in the city.

“And with protests against both these laws set to continue in the coming weeks and beyond, the heavy-handed police response so far is a worrying indication that Hong Kong is set to face another summer of repression.”

Thousands of protesters took to the streets of Hong Kong today as lawmakers debated the national anthem bill, which would criminalise “insulting” or “misusing” the Chinese national anthem with a fine of up to HK$50,000 (£5,200) and a maximum penalty of three years’ imprisonment.

Since 2015, there have been several incidents of Hong Kong football fans booing or turning their backs when the Chinese national anthem is played at games. The new law would make such behaviour a criminal offence.

Hundreds of people have been rounded up or detained so far on Wednesday, while social media footage has shown police firing pepper pellets to disperse a protest in the Central district at lunchtime, despite the presence of numerous bystanders in the area.

Protesters also denounced the national security law proposed by China’s National People’s Congress last week and set to be passed in Beijing tomorrow. The law cracks down on “separatism, subversion of state power, terrorism and foreign interference” in Hong Kong.