Guantánamo: renewed call for closure of infamous prison ahead of 20th anniversary 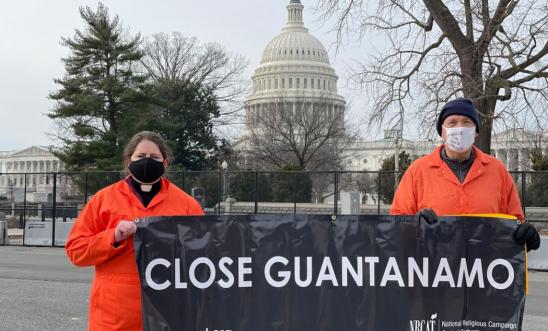 Activists in the USA in Janaury 2021 © Alli Jarrar/Amnesty International

Ahead of the 20th anniversary (11 January) of the opening of the now infamous military prison at Guantánamo Bay, Daphne Eviatar, Amnesty International USA’s Security with Human Rights Programme Director, said:

“This is an anniversary that should never have been reached.

“Since the Bush administration, there has been agreement among national security experts and across the political spectrum that the Guantánamo prison - a notorious site of torture and unjustifiable indefinite detention - should be closed.

“President Biden must uphold his commitment to close Guantánamo once and for all.

“The longer the prison remains in use, the longer it continues to undermine US credibility globally on human rights.”

Twenty years after its establishment at an offshore military base in the aftermath of the 11 September attacks, Guantánamo still holds 39 detainees - none of whom have received a fair trial. They continue to be detained indefinitely in violation of due process of law and other internationally-recognised human rights. Instead of trials, the Guantánamo “military commissions” have failed to bring justice to the victims and survivors of the 9/11 attacks, while denying due process to the accused.

Amnesty International and other groups are staging a major protest in London tomorrow (8 January, starting in Parliament Square at 12:45pm) ahead of the Guantánamo anniversary date. Thirty-nine activists in orange jump suits and black hoods will walk from Parliament Square to Trafalgar Square to demand that President Biden close Guantánamo without further delay. They will be accompanied by fellow activists, with as many as 100 people expected to attend in total.

The event has been organised by the UK Guantanamo Network (including Amnesty), Freedom from Torture, the Guantanamo Justice Campaign and the London Guantanamo Campaign.