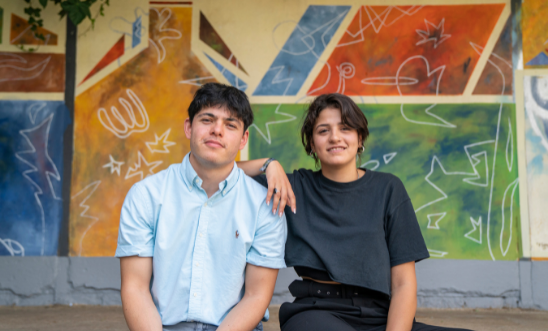 Trial to begin on Thursday 18 November in Lesvos, Greece

Sarah Mardini, a 25-year-old Syrian refugee, and Seán Binder, a 27-year-old German national, face a series of unfair and baseless charges dating from the time they spent volunteering, spotting and helping boats in distress in Lesvos.

Sarah originally arrived in Lesvos as a refugee in 2015. When the engine of the boat she was on failed, Sarah and her sister saved 18 fellow passengers by dragging the sinking boat to safety. Later, she returned to Greece and went on to volunteer at a Greek search and rescue organisation, where she met Seán, a trained diver.

Sarah and Seán were arrested in 2018 on numerous charges including smuggling, espionage, unlawful use of radio frequencies, and fraud. They spent more than 100 days in prison before being released on bail in December 2018.

On 18 November, Sarah and Seán will go on trial where they face ‘misdemeanour’ charges which can carry a sentence of up to eight years.

They also face felony charges including ‘people smuggling’, ‘fraud’, 'being part of a criminal organisation' and ‘money laundering’ which, if they come to trial, could lead to up to 25 years imprisonment.

“Sarah and Seán did lifesaving humanitarian work, spotting boats in distress off Greek shores and providing those onboard with blankets, water and a warm welcome. The charges they face are farcical and should never have come to trial.

“Seán and Sarah's lives are on hold, their futures at risk simply because they showed solidarity and compassion to people in need. Sarah and Seán must not pay the price for Greece’s cruelty at Europe’s borders.”

According to a legal opinion from human rights legal firm Leigh Day in London, there have been several serious breaches of international human rights law in Seán’s case to date. Seán approached Leigh Day to commission a legal opinion on the legality in international law of his arrest, pre-trial detention and proposed trial for alleged offences committed whilst volunteering on search and rescue missions for Emergency Response Centre International.

“On the basis of the evidence we have seen, we believe that there have been serious breaches of Seán’s human rights by the Greek authorities in relation to his detention, the charges brought against him and the delays in hearing his case in court. Seán’s case is important as it shows what appears to be a disturbing trend towards criminalising human rights defenders who are working for recognised NGOs seeking to help refugees.

“We urge the Greek authorities to review Seán’s case immediately to prevent any further potential breaches of his human rights. Urgent reconsideration needs to be given to whether his criminal trial should go ahead at all.”

“The law obliges us to help people in distress at sea. What we did was not heroic, it was normal, and anyone else would do the same in our place. The real victims of European migration policies are the refugees and migrants forced to risk their lives to reach ‘Fortress Europe’.”

Hundreds of people like Sarah and Seán have been criminalised across Europe for doing humanitarian work helping refugees and migrants. In a 2020 report Amnesty detailed the numerous ways in which European governments have deployed restrictive, sanctioning and punitive measures against people who defend refugees and migrants’ rights. They do so by misusing laws and policies, including the legally ambiguous and inconsistent rules in the so-called EU Facilitators’ Package. Dozens of prosecutions have been launched against individuals and NGOs, including Médecins Sans Frontieres, in Italy, Greece, France and Switzerland.

Amnesty is deeply concerned that the injustice of the trumped-up charges is being further compounded by a flagrant violation of internationally recognised fair trial standards, in particular the right to not be tried in absentia. The Greek authorities refused to lift Sarah Mardini’s travel ban which means that Sarah will not be able to attend her own trial.