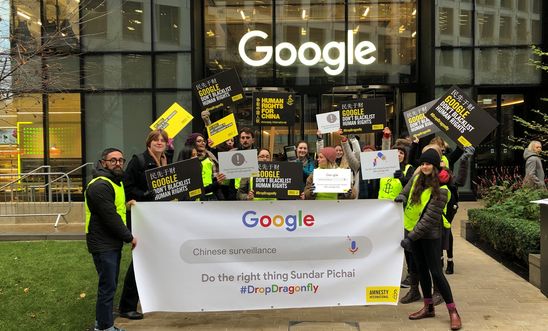 Responding to a statement by a senior Google executive this week that the company has “terminated” plans to launch Project Dragonfly, its censored search engine for China, Joe Westby, researcher on technology and human rights at Amnesty Tech, said:

“This is the first time that Google have so clearly confirmed that they have abandoned Project Dragonfly entirely.

“Its public walk-back on this disastrous project is good news and is in no small part thanks to the campaigning of hundreds of Google employees, 70-plus human rights organisations and thousands of people around the world who demanded the company respect human rights and ‘drop Dragonfly’.

“However, this latest comment still falls short of committing to conclusively dropping its censored search engine for good. In reality, Google’s position refusing to rule out working with China on such projects in the future has not changed.

“Google must now go one step further and commit to never aid China’s large-scale censorship and surveillance. The company’s past evasiveness on this issue leaves the door open to future abuses.

“CEO Sundar Pichai should make a definitive statement that it will not engage in any project in China that undermines human rights full stop.”