Global use of death penalty up by 20% - major new report 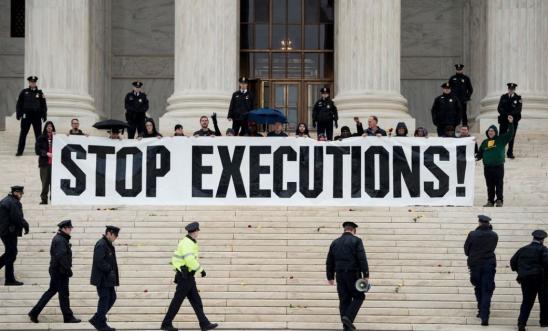 Disturbing spikes in Iran and Saudi Arabia, while 86 people given death sentences under martial law in Myanmar

Last year saw a worrying rise in executions and death sentences as some countries returned to business as usual after earlier Covid-19 restrictions were removed from courts, Amnesty International said today in its global report on the death penalty.

Amnesty’s 66-page report - Death Sentences and Executions 2021, its authoritative annual survey on the death penalty - shows that at least 579 executions were known to have been carried out in 18 countries last year⁠, a 20% increase on the recorded total for 2020⁠.

As in previous years, the data does not include the thousands of people Amnesty believes were executed in China, as well as the significant number of executions thought to have taken place in North Korea and Vietnam. State secrecy in these countries make it impossible to accurately monitor executions. Amnesty’s report also emphasises that some of the figures should be regarded as minimum figures.

One disturbing trend identified in Amnesty’s report was the effect of a lifting of earlier Covid-19 restrictions on judicial buildings including courts in various countries. With these steadily re-opening during 2021, judges handed down at least 2,052 death sentences in 56 countries - almost 40% more than in 2020. Overall, by the end of last year at least 28,670 people were under sentence of death around the world.

Iran accounted for the biggest portion of the 2020-2021 rise, executing at least 314 people (up from at least 246 in 2020), its highest execution total since 2017. Iran has a mandatory death penalty for possession of certain types and quantities of drugs⁠⁠, and last year recorded executions in the country for drug-related offences rose more than five-fold to 132 (from 23). The known number of women executed in Iran also rose (from nine to 14), while the Iranian authorities executed three people who were under the age of 18 at the time of the crime, contrary to international law.

In turn, executions in Saudi Arabia last year more than doubled compared to 2020 (up from 27 to 65), a grim trend that has continued - with the shocking execution of 81 people in a single day earlier this year.

However, Amnesty’s report also shows that an underlying long-term trend toward reduced use of capital punishment continued during 2021, with the yearly death toll of 573 making it the second-lowest (after 2020) recorded by Amnesty since at least 2010. In the USA, 2021 saw the lowest number of executions (11) since 1988, while Virginia became the 23rd state - and first southern state - to abolish the death penalty, and the Biden administration established a temporary moratorium on federal executions in July.

“Instead of building on the opportunities presented by hiatuses in 2020, a minority of states demonstrated a troubling enthusiasm to choose the death penalty over effective solutions to crime, showing a callous disregard for the right to life even amid urgent and ongoing global human rights crises.

“After the drop in their execution totals in 2020, Iran and Saudi Arabia once again ramped up their use of the death penalty last year, including by shamelessly violating prohibitions put in place under international human rights law.

“The minority of countries that still retain the death penalty are on notice: a world without state-sanctioned killing is not only imaginable - it is within reach and we will continue to fight for it.”

Amnesty’s report shows that executions occurred in the following countries during last year:

Last year, several countries deployed the death penalty as a clear instrument of state repression against minorities and protesters:

-Iran: death sentences were disproportionately used against members of ethnic minorities for vague charges such as “enmity against God”. At least 19% of the recorded executions (61) were members of the Baluchi ethnic minority, who constitute only about 5% of the population.

-Myanmar: saw an alarming increase in the use of the death penalty under martial law, where the military transferred the authority to try civilian cases to military tribunals which conducted summary proceedings without the right to appeal. Eighty-six people were arbitrarily sentenced to death, several in absentia, in what was widely perceived as a targeted campaign against protesters and journalists.

-Saudi Arabia: victims of the country’s deeply flawed justice system included Mustafa al-Darwish, a young man from the Shi’a minority who was accused of participating in violent anti-government protests. He was executed on 15 June following a grossly unfair trial based on a “confession” extracted through torture.