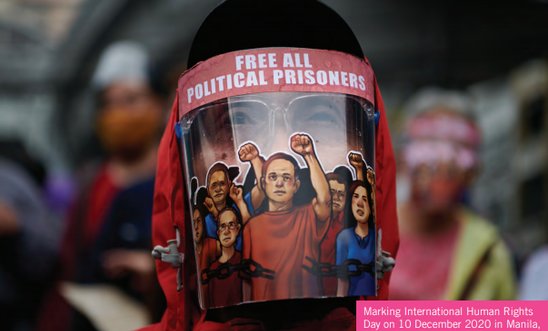 Amnesty International has revealed human rights defenders around the world are facing ongoing attacks from governments for their brave work during the COVID-19 pandemic.

A new report published today (10 February), ‘On the human rights frontline - How the UK Government can defend the defenders’ is based on interviews with 82 Human Rights Defenders from Colombia, Egypt, the Philippines, Russia, Libya, Zimbabwe and Afghanistan. The report calls for the UK Government to increase efforts to protect HRDs during the pandemic and beyond.

In total, 94% of activists interviewed - including journalists, lawyers, women’s rights defenders and LGBTI+ activists – said they had experienced threats, harassment, abuse or death threats as a result of their work. However, only 6% said they had received support from the UK in the context of these threats.

“Around the world, human rights defenders are holding governments to account for their COVID-19 response plans and shining a light on the impact of this deadly disease.

“But instead of being recognised for their bravery, many have been targeted and are experiencing attacks, reduced protection and draconian repression disguised as emergency responses.

“The UK Government has pledged to stand up for human rights defenders around the world. We now need to see words turned into action. The UK’s voice has power. It’s time to use it and to be a world leader.”

The report is published by Amnesty International UK and Centre for Applied Human Rights (CAHR), it also draws on the expertise of a range of UK and international organisations with decades of experience working with human rights defenders around the world, such as the Law Society of England and Wales, Peace Brigades International UK, Bond and other leading organisations.

"With foreign office budgets cut to the bone, now more than ever the UK government needs to see human rights defenders as key workers fighting on the frontlines for free and open societies. The government should put a strategy to protect and partner with HRDs front and centre of its foreign policy, not just to honour the UK's long tradition of human rights, but to help support its efforts to promote the rule of law and freedom of the press. Working hand in hand is a win-win situation that we can no longer ignore”

“Lawyers around the globe face harassment, prosecution, imprisonment and violence for representing their clients and upholding the rule of law.

“The rule of law is essential to preserving democratic values, fundamental freedoms and good governance. Lawyers must be allowed to carry out their professional duties without interference and intimidation.

“We urge the government to provide human rights defenders, including members of the legal profession, the support and protection they deserve during the COVID-19 pandemic and its aftermath.”

In several countries, health workers and journalists who spoke out about COVID-19 during the pandemic were attacked in an attempt to silence them.

In Egypt, health workers who spoke out were arrested by the government and accused of spreading ‘false news’.

One human rights defender in Egypt told Amnesty: “We have been victims of a smearing campaign that even targeted us personally. The news published false information about me, alleging that because I was meeting a lot of foreigners, I had contracted COVID-19 and I was spreading it by infecting other people.”

Amnesty found that activists, journalists and critics continue to face arrest, whilst those already in prison are excluded from government measures to release prisoners in response to COVID-19 outbreaks.

In Turkey, decongestion measures explicitly excluded those who are held in pre-trial detention, and those who are on remand for or have been convicted of offences under Turkey’s overly broad anti-terrorism laws. They include political and human rights activists, journalists, academics, and others who have spoken out against the government.

In Iran, authorities announced that they had temporarily released 85,000 prisoners - but many human rights defenders continue to be held on politically motivated charges in appalling conditions.

In Egypt, the government failed to release human rights defenders detained solely for expressing their views, as well as thousands of other pre-trial detainees, many of whom are facing overly vague “terrorism”- related charges amid concerns over breaches of due process.

In Venezuela, Russia and Zimbabwe, journalists have been arrested or attacked for reporting on coronavirus and their respective government’s responses.

On 13 April 2020, Head of the Chechen Republic Ramzan Kadyrov posted a video on Instagram in which he issued a death threat aimed at Russian journalist Elena Milashina. The threat followed the publication of her article about the spread of COVID-19 in Chechnya. In Venezuela, journalist Darvinson Rojas was held by the Special Action Forces for 12 days in a politically motivated attempt to silence his reporting on the pandemic.

Tabani Moyo, from the Media Institute for Southern Africa (based in Zimbabwe) told Amnesty: “We’re in an existential crisis, not a health crisis. The most attacks against human rights defenders since the beginning of the pandemic are against journalists. The challenge we are in is broader than health. Though it is our right to health that is under siege, to enjoy it many other rights are under attack.”

In several countries such as Russia and the Philippines, LGBTI+ activists are experiencing systemic and domestic abuse during the pandemic. Many have been left with no choice but to stay at home in non-accepting environments. This is because of people’s livelihoods being severely affected by Covid-19 with job losses, meaning many have had to go back to their hometowns and to stay with their families.

LGBTI+ people have also been blamed for the pandemic increasing the discrimination and stigmatisation of LGBTI+ communities and making the work of LGBTI+ activists ever more challenging.

“COVID has shrunk the space for LGBTI+ people and community in the Philippines to express their identity.”

"The pandemic has affected all areas of our work. Since March, we are offering more practical support to the community than ever before. The LGBTI community in Russia is extremely vulnerable. It is especially true for LGBTI youth who have to stay at home in self-isolation, commonly being exposed to psychological and physical violence on their relatives' side.”

In the report Amnesty and partner organisations set out recommendations for how the UK Government can take action to prioritise human rights defenders in its foreign policy work, specifically calling for a strategic approach which would identify both actions that Embassies could take to better support those under attack, but also pushing back against the global trend towards repression.

Of the 82 human rights defenders across seven countries who were interviewed, for this report, regarding their experiences with the UK government: