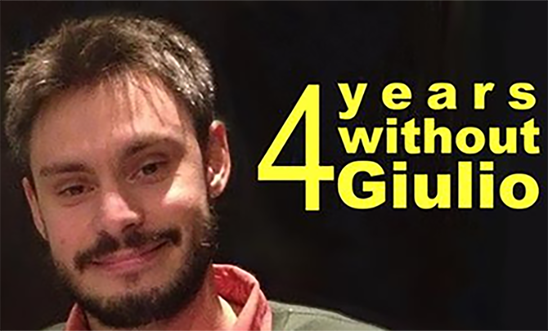 Amnesty International will mark the fourth anniversary of the unsolved murder of the Cambridge University student Giulio Regeni with vigils in Cambridge and outside the Egyptian Embassy in London.

Regeni, a 28-year-old Italian national studying for a PhD, was in Egypt researching independent trade unions when he was abducted and murdered in January 2016.

His mutilated body was found in a ditch outside Cairo on 3 February 2016.

The Egyptian authorities have never properly investigated Regeni’s murder and there are widespread concerns that the authorities themselves were responsible for his killing. Plain-clothed police arrested Regeni on 25 January and an Italian post-mortem examination found he was tortured before his death.

Similar vigils are also set to take place in various towns and cities in Italy, where a high-profile “Truth for Giulio” campaign continues unabated.

Amnesty’s Cambridge City and Cambridge University groups, members of the University and College Union and other supporters, will conduct the vigil.

Daniel Zeichner, MP for Cambridge - as well Regeni’s friends and colleagues - will address the gathering. A minute’s silence will be held at 6.41pm, when the last communication was received from Regeni before his abduction in 2016.

Amnesty activists will hold aloft “Truth for Giulio” placards, and statements from Regeni’s parents will be read out (to be confirmed).

Campaigners will also deliver a letter to the Egyptian Embassy demanding a full, impartial and independent investigation into Regeni’s murder.

“The abject failure of the Egyptian authorities to effectively investigate Giulio’s brutal murder is shocking but not surprising.

“In recent years, Egyptian prosecutors have pursued bogus cases against peaceful protesters, journalists and human rights activists - while a mountain of cases involving violence by the security forces has been ignored.

“The Egyptian authorities must conduct a full inquiry and finally bring the perpetrators of Giulio’s abduction and killing to justice.”