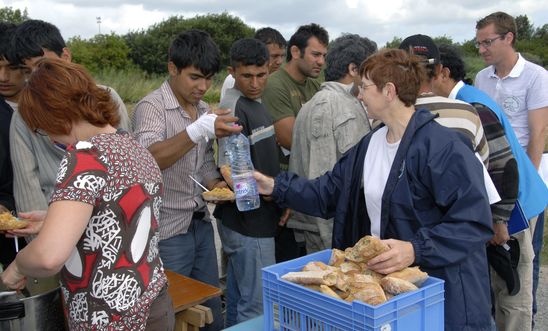 Human rights defenders say abuse, intimidation and threats of arrest by French authorities have become “part and parcel of their daily work”

More than 1,200 refugees living in tents in informal camps in northern France

The 30-page report - Targeting Solidarity - details how people helping and working with refugees and migrants in the informal refugee camps around Calais and Grand-Synthe are routinely targeted by the police and the court system.

“Providing food to the hungry and warmth to the homeless have become increasingly risky activities in northern France, as the authorities regularly target people offering help to migrants and refugees.

“Migrants and refugees did not simply disappear with the demolition of the ‘Jungle’ camp in 2016 and more than a thousand men, women and children are still living precarious lives in the area. The role of human rights defenders who offer them support is crucial.

“Rather than attempting to make the lives of migrants and refugees as difficult as possible, French authorities should take concrete measures to alleviate their suffering and provide shelter and support to all those living on the streets.”

Violence against refugees and migrants

Following the destruction of the ‘Jungle’, more than 1,200 refugees and migrants, including unaccompanied children, are now living in tents in the camps in northern France. They have no regular access to food, water, sanitation, shelter or legal assistance and are subject to evictions, harassment, and violence at the hands of the police.

In interviews with Amnesty, one Afghan man said that he was beaten on his back with a baton by police during a forced eviction, and another described how a police officer had urinated on his tent. An Iranian man said: “I left my country looking for safety, but here I face police abuse…The police come every day to take my tent and clothes.”

The number of camps and tents destroyed in Calais and Grande-Synthe increased last year, with 391 evictions carried out in the first five months of 2019 alone. Once evicted, migrants and refugees are at increased risk of violence and abuse. One local woman who provides migrants with help, said how she had witnessed police spray migrants with teargas in the face while they were sleeping in her garden.

The increased number of evictions is a consequence of France’s “no attachment points” policy, which attempts to deter people from staying in the area by ensuring that camps are not set up. While authorities have put in place an outreach service to enable refugees and migrants access reception centres and asylum offices in France, these centres are a long way from Calais and Grande-Synthe and sometimes there is not enough capacity to accommodate them.

In order to alleviate their suffering, human rights defenders have attempted to fill the gap and provide the essential support and services that the French state is failing to offer.

Instead of recognising the importance of their work, authorities have obstructed, intimidated, harassed and in some cases started baseless prosecutions and even used violence.

Several human rights defenders told Amnesty that acts of intimidation, threats of arrest, abuse have become “part and parcel of their daily work.” One humanitarian worker said that she was violently pushed to the ground and choked by police in June 2018 after she had filmed four officers chasing a foreign national in Calais.

A report last year by four organisations found that there had been 646 instances of police harassment and abuse against volunteers between November 2017 and June 2018. There have been 72 recorded instances this year, but the real figure is likely to be much higher.

When reporting mistreatment of refugees, migrants, and human rights defenders, complainants say that they are not taken seriously. Charlotte Head, a volunteer who made several complaints about police behaviour to the police’s internal investigatory body, was warned that her complaints were “defamatory in character” and could constitute a “crime”.

One local human rights organisation, Cabane Juridique, filed more than 60 complaints to different authorities and bodies between January 2016 and April 2019. In May this year, the French Ministry of Justice reported to Amnesty that regional courts had received just 11 complaints since 2016, and only one was being investigated by prosecutors.

Stress, anxiety and the fear of prosecution

Human rights defenders reported feeling that the pressure on them is increasing and having a negative impact on all aspects of their lives. Some have experienced insomnia, stress and anxiety whilst others describe the impact of prosecutions as debilitating.

Loan Torondel who had been working in Calais said: “I feel that I am caught between the acute needs of people I am trying to help and the intimidation of French authorities who are trying to hamper humanitarian activities and label our activities as crimes. This is not a sustainable working environment for us, and it is the people we help who pay the consequences."

“The level of danger facing activists across the globe has reached crisis point. Every day ordinary people are threatened, tortured, imprisoned and killed for simply standing up for their rights and the rights of others.