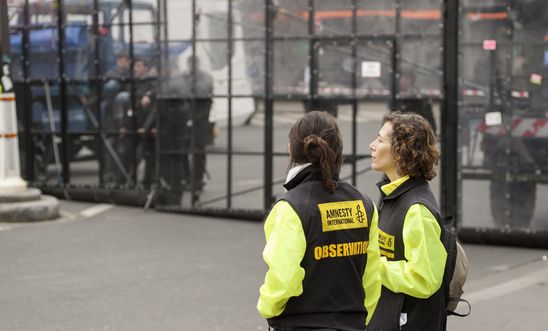 March for justice and dignity, 19 March 2017 in Paris, in the presence of Amnesty International observers. © Martin Barzilai

100 people arrested, 50 kettled and many more prevented from peacefully demonstrating by French authorities

The G7 meeting in Biarritz has been marred by an unjustifiable crackdown on freedom of assembly and movement, Amnesty International said today.

Authorities also prevented a number of peaceful protests organised around the Summit in cities and areas close to Biarritz, with only two demonstrations allowed to proceed.

“From the beginning of this G7 Summit in Biarritz, it was clear that the French authorities had a plan to restrict freedom of assembly and movement, with the announced presence of more than 13,000 police to man the area.

“It is scandalous that hundreds of people were kettled for hours for no reasons whatsoever and before even starting their peaceful protest.

“It is also sadly ironic to see that many points of the agenda for the G7, like the climate crisis and gender equality, were there because of the pressure exercised by the civil society, and that the French authorities felt they had to undermine this very same civil society’s right to peacefully demonstrate during these three days. It undermines all the talk at the summit.

“French authorities must stop treating the right to protest with contempt. Unless the protesters have been involved in violent acts, they must be freed immediately and unconditionally.

“Exercising one’s freedom of expression and of peaceful assembly is not a crime, but a fundamental human right.”

Restriction of freedom of assembly

Exceptional security measures have been put in place in cities such as Bayonne, about 8km from Biarritz, and the whole of Biarritz city itself, to prevent people from gathering to exercise their freedom of assembly.

On Saturday afternoon, authorities deployed hundreds of police officers to Bayonne and erected four-metre-high fences on all four bridges, completely dividing the city into two. Amnesty’s observers were stopped and searched six times in about two hours in the area.

Authorities had issued an order establishing a security area covering the city centre where everyone could be subjected to stop and searches. A few hundred protesters, as well as journalists, observers and residents alike, were blocked for about five hours. The police only allowed them to leave late in the evening.

Police also kettled about 50 peaceful protesters who attempted to gather on a parking lot in Bidart, 8 km from Biarritz, on Sunday 25 August. This was well outside the security area within which heads of state were gathering. The organisation’s observers were also affected by the incident, which took over two hours, without the possibility to leave.

When Amnesty’s staff showed a letter to the police detailing their observation mission, they were told that the exercise was with a view to conduct identity checks even though the delegates nor anyone else were asked to produce the necessary documentation.

Despite the fact that only very few violent incidents were observed during the three days, about 100 people were arrested between 23 and 25 August, with about 70 of them placed in pre-charge detention with some trials expected to start today. Among them, three women observers from the French Human Rights League were arrested and placed in pre-charge detention on 24 August, after detection of protection materials. They were finally released on Sunday 25 August.

This led the organisers of the G7 “counter-summit” to cancel several peaceful actions that had been planned on 25 August, following the heavy security measures and the arrest of one of their members on 24 August. The protesters could only organize a peaceful demonstration on Saturday 24 August in Hendaye, over 30 kilometres from the G7 summit in Biarritz.