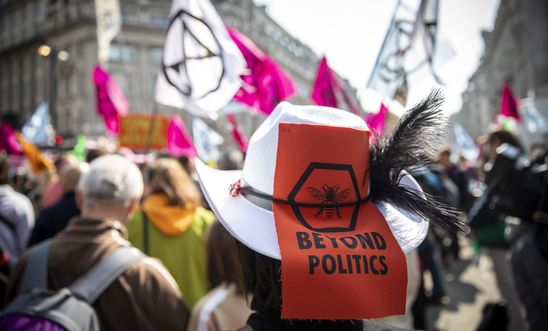 On Monday evening, the Metropolitan Police issued a revised section 14 order saying demonstrators protesting in London after 21:00 BST could be arrested.

“Imposing a blanket ban on Extinction Rebellion protests is an unlawful restriction on the rights to freedom of expression and peaceful assembly. Under UK and international human rights law, the Government has an obligation to facilitate the exercise of these rights.

“The majority of those protesting have been doing so peacefully, removing and prosecuting activists for engaging in non-violent direct action to raise their voice is deeply worrying. Overly harsh and disproportionate charges will have a chilling effect on rights.

“This is a heavy-handed and unacceptable move by the Metropolitan Police. Certain disruption to ordinary life for protesting is natural, and it needs to be tolerated. The police must respect the rights of those peacefully protesting and ensure that the voices of those demanding action on tackling the climate crisis are allowed to be heard.”

As of Monday 7 October, Extinction Rebellion has been calling for a two-week "International Rebellion" across the world. Media and observers have reported concerns over heavy handed policing; mass arrests, including preventive arrests; use of vaguely defined criminal offences against climate activists across Europe.