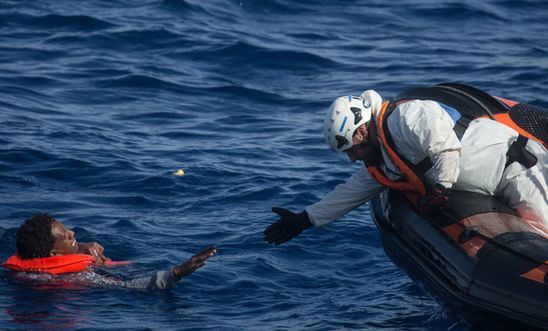 European Union foreign ministers meeting at the Foreign Affairs Council in Brussels on Monday (15 July) should issue a call on the Libyan authorities demanding that they close their migrant detention centres, Amnesty International, Human Rights Watch and the European Council on Refugees and Exiles (ECRE) have said.

In the wake of a deadly attack on the Tajoura detention centre earlier this month, the Libyan authorities have shown a preparedness to release people from detention centres.

Last month, citing “ghastly conditions” in detention centres (see below), the UN’s High Commissioner for Human Rights call for the “immediate release” of all migrants and asylum-seekers detained in centres in Tripoli.

Amnesty, Human Rights Watch and ECRE are also calling on EU ministers to make a commitment on behalf of EU states to facilitate the evacuation of detainees to safe places, including outside of Libya and to EU countries. The three organisations said that EU countries should ensure that those evacuated from detention centres are offered safe routes and regular pathways out of Libya.

Since the beginning of April, the UNHCR has been able to evacuate only 289 people to Niger and 295 to Italy - the only EU country that has so far agreed so far to take asylum-seekers directly from Libya. Amnesty, Human Rights Watch and ECRE said that non-EU countries should also support evacuation resettlement efforts.

Matteo de Bellis, a researcher on migration and asylum at Amnesty International, said:

“The horrific attack on the Tajoura detention centre last week has once more showed the mortal danger that women, men and children locked up in Libya are exposed to. Rather than keeping their eyes closed in the face of the inhuman conditions, torture, rape and other abuse refugees and migrants face in Libya’s detention centres, EU governments should urgently set up safe routes out of Libya for them, and ensure that people rescued in the central Mediterranean are not returned to Libya.”

“Expressions of outrage over dire conditions and dangers to detainees amid fighting in Tripoli ring hollow without urgent life-saving measures to get people out of harm’s way.”

“The IOM, UNHCR, African Union and the shipping industry can all use their leverage to get European states on board.”

EU has outsourced its responsibility to Libya

According to the IOM, as of 6 July , the EU-supported Libyan Coast Guard had intercepted and taken back to Libya 3,750 people since the beginning of the year. In the same period, 4,068 people had reached Italy and Malta, while 426 people had died in the central Mediterranean.

EU governments have never conditioned their support to Libyan authorities on closing the detention centres and releasing the thousands of people unlawfully detained. They have insisted instead that EU-funded humanitarian assistance would lead to improved living conditions in the detention centres, despite any evidence that it does. They have also continued to aid and abet the Libyan Coast Guard in returning people intercepted at sea to indefinite detention in Libya.

In March this year, Human Rights Watch and Amnesty published a “plan of action” for a Mediterranean rescue system, with a proposal for a temporary system to ensure that people rescued at sea are promptly disembarked as well as an equitable system of shared responsibilities through relocation.

Already appalling conditions in migrant detention centres under the control of the UN-recognised Government of National Accord, based in Tripoli, have deteriorated since forces under General Khalifa Hiftar began their assault on the capital Tripoli in early April.

Besides the Tajoura detention centre, where 53 people died in the 2 July attack, other centres in and around Tripoli have seen severe food and water shortages due to fighting in the vicinity, as well as limited access to detainees by humanitarian organisations providing vital care.

By the beginning of July, the UNHCR has transferred 1,630 people out of detention centres on the front lines to its Gathering and Departure facility, also in Tripoli, as well as to other Libyan detention centres in areas deemed safer. UNHCR estimates that 3,800 people are detained in detention centres near conflict areas. Under Libyan law, any undocumented migrant, asylum-seeker, or refugee may be detained without an opportunity to challenge the lawfulness of the detention, making the detention arbitrary.