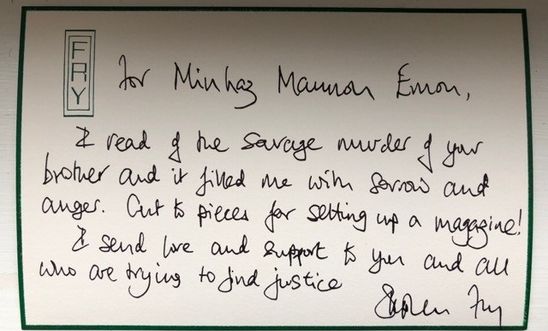 Anish Kapoor, Vanessa Redgrave and Kaiser Chiefs join the thousands who are calling on the UK government to end the inhumane overuse of immigration detention

UK celebrities have joined more than one million people from around the world who have written letters calling on governments and authorities to end the detention or persecution of individuals, as part of Amnesty International’s Write for Rights campaign.

Amnesty’s annual campaign runs throughout November and December and encourages people to write messages in solidarity with a number of individuals whose basic human rights are being attacked. People being supported include those held unfairly in UK immigration detention, an Egyptian lawyer who is being persecuted by the authorities for defending survivors of rape and domestic abuse, and the family of a Bangladeshi blogger who was hacked to death for starting the country’s first LGBTIQ magazine.

More than 1.7 million messages have already been written by people worldwide and high-profile celebrities, artists and musicians have joined their calls.

“It’s vital when one is under threat or attack in prison to hear from people who support us. Writing a letter is a small act with a huge impact. Do it now and feel the love.”

Open letters – photographs of the hand-written letters in links

Emma Thompson and fashion designer Vivienne Westwood have written messages to ask the Egyptian authorities to drop their unfair charges against Azza Soliman, an Egyptian woman working to defend victims of rape and abuse in her country.

Actor and writer Stephen Fry has called for justice for Xulhaz Mannan, an LGBTIQ blogger and activist from Bangladesh who was killed in 2016.

Journalist and presenter Jeremy Paxman - who also starred in a video to promote Amnesty’s campaign - has sent a message of support to Issa Amro and Farid al-Atrash who have both dedicated their lives to peaceful campaigning against Israeli settlements in Palestine and now face trial in an Israeli military court.

Quotes from the letters

Addressing the Egyptian authorities to ask them to drop the charges against Azza Soliman, Emma Thompson wrote: “Nothing will be gained by targeting such a wonderful contributor to Egyptian society. I do beg you to act immediately on her behalf.”

Vivienne Westwood also wrote to support Azza Soliman: “Azza Soliman is a world heroine, and we must assume that she’s also a heroine in Egypt, and in supporting her bravery we feel that we’re helping the Egyptian population.”

Stephen Fry, sending a message to the brother of Xulhaz Mannan, wrote: “I read of the savage murder of your brother and it filled me with sorrow and anger. Cut to pieces for setting up a magazine! I send love and support to you and all who are trying to find justice.”

Anish Kapoor wrote to people trapped in UK immigration detention with the encouragement that: “You are not forgotten.”

Every year Write for Rights makes a huge difference to the lives of people living through abuse, detention or persecution. In previous years, the letters written have:

People can write letters as part of Write for Rights 2017 until the end of December. See here for more details.