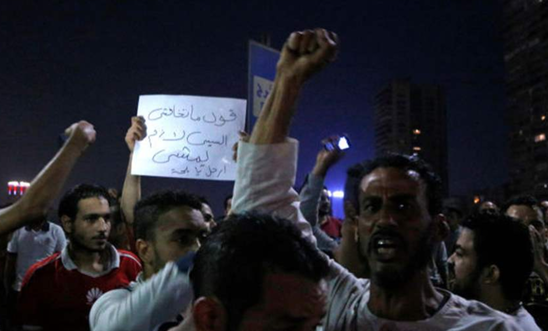 Birdshot and tear gas used against protesters, as hundreds arrested

Amnesty has documented how the Egyptian security forces have carried out sweeping arrests of protesters - rounding up journalists, human rights lawyers, activists and political figures in an attempt to silence critics and deter further protests from taking place.

The government has also added the BBC and Alhurra news to a list of 513 websites already blocked in Egypt, while disrupting messaging apps to thwart further protests.

Amnesty has documented the arrest of at least 59 people from five cities across Egypt during weekend protests, while local human rights organisations reported hundreds of arrests across the country. The Egyptian Center for Economic and Social Rights said that 964 people were arrested between 19 and 24 September.

President al-Sisi responded to media questions in New York yesterday claiming the protests were instigated by “political Islam”. However, Amnesty has found that protesters are from a very diverse range of socioeconomic, gender and religious backgrounds, including non-political ones. All those detained faced the same “terrorism”-related charges.

“The government of President Abdel Fattah al-Sisi is clearly shaken to its core by the outbreak of protests and has launched a full-throttle clampdown to crush demonstrations and intimidate activists, journalists and others into silence.

“Instead of escalating this repressive backlash, the Egyptian authorities must immediately release all those detained for peacefully exercising their rights to freedom of expression and assembly, and allow further protests on Friday to go ahead.

“The world must not stand silently by as President al-Sisi tramples all over Egyptians’ rights to peaceful protest and freedom of expression.

“Egypt’s international allies must send a clear message that the ruthless crushing of peaceful dissent will not be tolerated.”

Following the crackdown, hundreds of detainees were held in Central Security Forces camps without access to their lawyers or families. Some were later released, but at least 274 were brought before the Supreme State Security Prosecution, and at least 146 in front of local prosecution offices in Cairo.

According to lawyers, prosecutors questioned suspects about their participation in the protests and told them they were being investigated on charges that include “aiding a terrorist group in achieving its goals”, “spreading false news”, “participating in unauthorised protests” and “misusing social media” to disseminate information of a “terrorist group”, before ordering their detention for 15 days.

In the aftermath of the protests, Egypt’s security forces have also rounded up lawyers, journalists, activists and politicians, and Amnesty has documented the arrest of five journalists. One of these, Sayed Abdellah, who had been sharing news about the protest in Suez on his Facebook account, was arrested on 22 September.

Meanwhile, Mohammed Ibrahim, a well-known blogger, was arrested for posting videos about the protests when he attended a Cairo police station on 21 September as part of his probation conditions. The following day, the human rights lawyer and activist Mahienour el-Masry was seized by men in plainclothes at around 7pm and bundled into a minivan after she left the Supreme State Security Prosecution building where she had been representing a detained human rights lawyer. She was later questioned by a prosecutor and detained. Other arrests included that of the labour leader Rashad Mohammed Kamal in Suez, who had taken part in the protests.

Amnesty has observed and verified the ongoing disruption of media platforms - such as BBC News - and web services, including communication apps such as Wire. Amnesty also received alerts of temporary service disruptions on WhatsApp and Signal.

The Supreme Court for Media Relations confirmed that BBC News’ website had been blocked due to “inaccurate” coverage of the demonstrations. Egypt’s State Information Service also warned foreign correspondents that they should “abide by internationally-recognised professional standards in their coverage of Egyptian affairs and news”.

“It seems the authorities are trying out new network interference tactics to restrict people's ability to access information, communicate securely and organise. They are keeping an eye on how people are adapting and learning to develop counter-measures.”