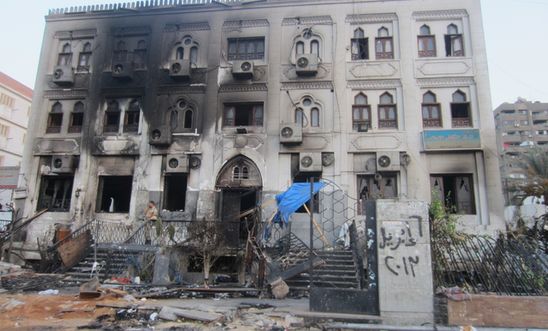 The burnt-out Rabaa Adawiya mosque, one of the main centres of protest for supporters of deposed president Mohamed Morsi © Amnesty International

The Egyptian authorities’ failure to hold anyone to account for the massacre by security forces of at least 900 people attending protests in Cairo in 2013 underlines the country’s unprecedented human rights crisis, said Amnesty International five years on from the killings.

On 14 August 2013, the Egyptian security forces opened fire on people in protest camps in two squares in the capital - Rabaa al Adawiya and al-Nahda.

However, instead of pursuing justice for the victims of the massacre, the Egyptian authorities have staged a mass show trial of 739 people, including journalists and photographers who attended the protests that day.

All 739 defendants have been charged with participating in unauthorised protests, and face other charges ranging from murder to “incitement to break the law”, “membership of an illegal group”, “illegal gathering” and involvement in violence.

Not only have the prosecutors failed to submit evidence establishing the individual responsibility of each of the 739 defendants, the Cairo Criminal Court has also failed to establish such responsibility, rendering this a grossly unfair trial. Despite this, 75 defendants are now facing the death penalty, including the well-known photojournalist, Mahmoud Abu Zeid, 30, known as “Shawkan”.

Amnesty considers Shawkan to be a prisoner of conscience who should be released immediately and unconditionally. More than 27,000 people have supported the Amnesty campaign for his release. A verdict on his case and many of the others on trial is expected on 8 September.

“President Abdel Fattah al-Sisi’s regime is keen to wipe out all memory of the massacre of the summer of 2013, even though the spectre of what happened will always loom over his administration.

“The Egyptian authorities’ repeated failure to respect the rights of protesters and their failure to hold anyone accountable for mass murders has contributed to an environment in which the security forces feel empowered to violate human rights with absolute impunity.

“The Rabaa Massacre was a horrific turning point for human rights in Egypt. Over the past five years human rights violations by Egyptian security forces, such as carrying out enforced disappearances and extrajudicial executions, have occurred on a scale never seen before.”

On 7 July, the House of Representatives initially approved a draft law submitted by the government granting immunity and privileges to senior officers of the armed forces chosen by President al-Sisi. The law is expected to receive the two-thirds House majority required for final approval.

This new law grants security officers immunity from prosecution for any act committed in the course of their duties during the period between the suspension of the country’s constitution from 3 July 2013 to 10 January 2016. Article 6 of the law stipulates that “officers shall also enjoy the special immunities for the heads and members of diplomatic missions during their period of service and the period of their summons”.

“This new law further illustrates the distorted priorities of al-Sisi’s administration.  It seems that fostering an environment of impunity and a disrespect for international laws, the Egyptian constitution and the basic tenants of justice, are the objective.

“The authorities have shamelessly bolstered the privileges enjoyed by security forces who took part in the Rabaa crackdown, while persecuting protesters and journalists who were exercising their freedom of expression and assembly. It is horrific that some of them may pay for it with their lives.”