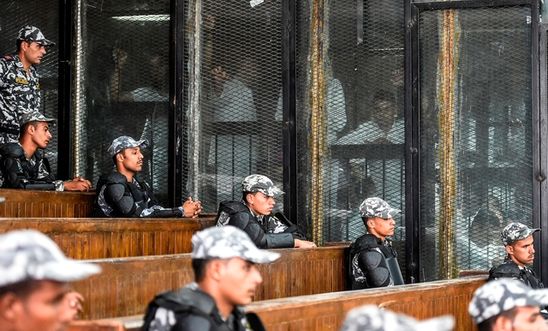 The Egyptian authorities are attempting to normalise human rights violations through a series of laws that “legalise” their escalating crackdown on freedom of expression, association and assembly, said Amnesty International today, six years since recently-deceased former president Mohamed Morsi was ousted from power on 3 July 2013.

Under President Sisi’s rule and in the name of fighting terrorism, thousands of people in Egypt have been subjected to arbitrary arrest - including hundreds of peaceful critics and protesters. Meanwhile, there has been wide impunity for human rights violations, including torture and other ill-treatment, mass enforced disappearances, extrajudicial executions and excessive use of force.

Since 2014, more than 1,891 death sentences have been handed down and at least 174 people executed, often following grossly unfair trials.

Summarising the situation, Amnesty has published a damning 20-page report - Gross human rights violations under President al-Sisi - which has been submitted to the UN Human Rights Council ahead of its review of Egypt’s human rights record in November.

Of the 300 human rights recommendations made to Egypt by other states during its previous UN review in 2014, Egypt accepted 237 and partially accepted a further 11. However, Amnesty’s research shows that Egypt has failed to implement any reforms in line with these recommendations.

“Since President Abdel Fattah al-Sisi came to power, the human rights situation in Egypt has experienced a catastrophic and unprecedented deterioration.

“Under President Abdel Fattah al-Sisi’s rule, laws and the judicial system, which are meant to uphold the rule of law and protect people’s rights, have been transformed into tools of repression used to prosecute anyone who peacefully criticises the authorities, while security forces routinely use torture to extract false confessions and obtain convictions in grossly unfair trials.

“The international community must stop being silent witnesses to the Egyptian authorities’ decimation of civil society, crushing of all signs of dissent and jailing of peaceful critics and opponents who face torture, enforced disappearances and cruel and inhuman prison conditions.”

Egypt’s 2017 NGO law is a key example of a draconian law introduced to stifle freedom of expression. The law gives the authorities powers to deny registration to NGOs, curtail their activities and funding, and permits the prosecution of their staff for vaguely-worded offences. Plans to amend the law were announced last December but it remains unclear whether the proposed amendments would address human rights concerns. Since 2014, at least 31 NGO staff members have faced travel bans and the authorities have frozen the assets of ten individuals and seven NGOs as part of ongoing criminal investigations into the foreign funding of NGOs.

In 2018, the Egyptian authorities approved new media and cybercrime laws which have further empowered them to censor print, online and broadcast media. According to the Association for Freedom of Thought and Expression, since May 2017 the authorities have blocked at least 513 websites, including news sites and websites of human rights organisations.

Throughout the period, the Egyptian authorities have routinely relied on a colonial-era law on assembly, adopted in 1914, and the draconian protest law of 2013 - as well as a 2015 counter-terrorism law - to arbitrarily restrict freedom of expression, peaceful assembly and association.

During an intensified crackdown between December 2017 and January this year, at least 158 people were arrested for peacefully criticising the authorities, attending political gatherings or taking part in protests. More recently, in May and June, the Egyptian authorities arrested at least ten peaceful opponents, including a former member of parliament, opposition party leaders, journalists and activists.

Since 2013, thousands have been held in pre-trial detention for prolonged periods, sometimes for up to five years, often in inhuman and cruel conditions lacking adequate medical care and with little or no access to family visits. In some cases, police have even detained individuals for months after the courts had ordered their release. In addition, a series of legislative amendments signed by President Sisi in 2017 have allowed the authorities to carry out mass arbitrary arrests, permit indefinite pre-trial detention and undermine the right to a fair trial.

Egypt’s Military Justice Code continues, contrary to international standards, to allow trials of civilians before military courts, which lack independence and are inherently unfair. Hundreds have been sentenced to death after unfair mass trials.

Amendments to Egypt’s constitution adopted earlier this year weaken the rule of law, undermine the independence of the judiciary, expand military trials for civilians, further erode fair trial guarantees, and enshrine impunity for members of the armed forces. The constitutional amendments will also enable the president to fully control the implementation of laws that “legalise” repression by granting him far-reaching powers to appoint senior judges and oversee judicial affairs.

The authorities have bolstered impunity for senior members of the armed forces for crimes committed between 2013 and 2016, a period during which hundreds of protesters were unlawfully killed by members of the security forces.