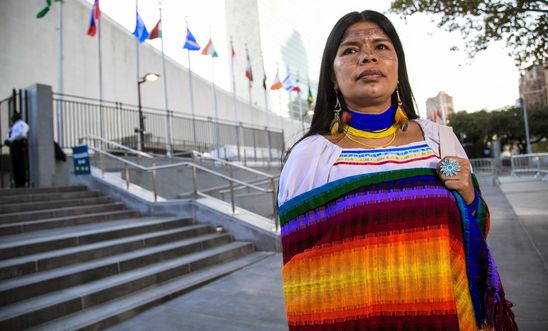 Women have faced death threats, physical abuse, and one environmental defender had her house set on fire

The Ecuadorian government is failing to provide effective protection or conduct criminal investigations into the harassment of members of the ‘Amazonian Women’, a collective of Ecuadorian women who defend the Amazonian environment and the rights of Indigenous people, Amnesty International said in a new report published today (Tuesday 30 April).

The report - ‘They will not stop us’ Ecuador: Justice and protection for Amazonian Women, defenders of the land, territory and environment’ - exposes the failings of the Ecuadorian Attorney General’s Office when responding to a series of attacks, death threats, and an incident of arson recorded in 2018 against Patricia Gualinga, Nema Grefa, Salomé Aranda and Margoth Escobar.

Amnesty’s year-long investigation notes that Ecuadorian authorities have repeatedly ignored possible motives relating to the Amazonian Women’s environmental activism – and the challenge this may pose to large-scale economic interests or traditional gender roles – when investigating these crimes or suggesting protective measures.

The report also notes that critical evidence in these abuse cases is often neither promptly collected nor sufficiently analysed by the authorities responsible for investigation, leaving the women defenders to take on the burden of investigation themselves.

Evidence which could potentially identify perpetrators - such as social media footage of a man with a spear issuing environmental defender Nemo Grefa with a death threat, in which his face is clearly visible - has not been assessed by the Attorney’s Office. The video is still circulating publicly on social media.

This insufficient investigation continues despite promises of support from President Moreno, with activist Margoth Escobar describing the current government as a ‘wolf in sheep’s clothing’.

“The lack of will to seriously investigate these attacks against human rights defenders and provide them with adequate protection sends a clear message to society: that these crimes are tolerated in Ecuador. This is unacceptable.

“The work of environmental defenders such as Amazonian Women and other Indigenous Peoples’ organisations is urgent and necessary in Ecuador and across the world given the increasingly clear impacts of the global environmental crisis on the human rights of us all.

“President Lenín Moreno and the new Attorney General have an opportunity to put an end to this serious situation and guarantee justice and protection to Amazonian Women and anyone defending rights in Ecuador. To do this they need to implement a national protection policy and a protocol for investigating crimes against them.”

Despite the impunity of their attackers and the lack of protection, Patricia Gualinga is clear that the ‘Amazonian Women’ remain committed to their work:

“We are united and we will continue our struggle to defend Mother Earth.”

“The level of danger facing activists across the globe has reached crisis point. Every day ordinary people are threatened, tortured, imprisoned and killed for simply standing up for their rights and the rights of others.

“The UK Government cannot stand idly by whilst these attacks continue. The protection of human rights defenders must become an urgent priority in this Government’s foreign policy.”