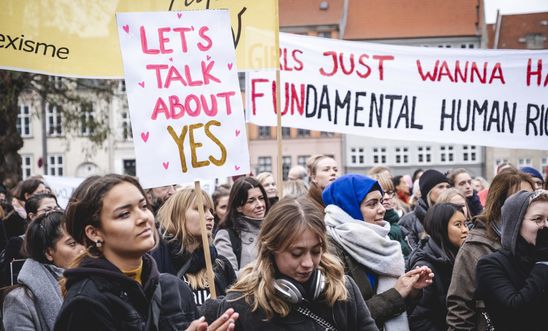 Denmark has some of the highest levels of rape in Europe

One woman forced into a police cell after reporting rape

“Despite Denmark’s image as a land of gender equality, the reality for women is starkly different” – Kumi Naidoo

Out-dated laws and an ‘insidious culture of victim blaming’ has left Denmark with some of the highest levels of rape in Europe, Amnesty International said in a report published today (5 March).

The 63-page report – ‘Give us respect and justice’ – reveals how women and girls in Denmark are being failed by flawed legislation and widespread harmful myths and gender stereotypes, resulting in endemic impunity for rapists in the country.

Danish law does not currently define rape based on a lack of consent, instead it uses a definition based on whether physical violence, threat or coercion was involved or if the victim is found to have been unable to resist.

Despite recent steps by the government to improve access to justice for survivors, rape in Denmark is still hugely under-reported and even when women do go to the police, the chances of prosecution or conviction are very slim. In 2017, just 890 rapes were reported to the police. Of these, 535 resulted in prosecutions and only 94 in convictions. This is despite government figures showing that 5,100 women experienced rape or attempted rape in 2017 and a separate study putting this figure far higher at 24,000 women.

“Despite Denmark’s image as a land of gender equality, the reality for women is starkly different, with shockingly high levels of impunity for sexual violence and antiquated rape laws which fail to meet international standards.

“The simple truth is that sex without consent is rape. Failure to recognise this in law leaves women exposed to sexual violence and fuels a dangerous culture of victim blaming and impunity reinforced by myths and stereotypes which pervade Danish society - from playground to locker room, police station to witness stand.

“By amending its antiquated laws and ending the insidious culture of victim blaming and negative stereotyping that currently exists in legal proceedings, Denmark has an opportunity to join the tide of change that is sweeping Europe.”

Amnesty’s research found that survivors often find the reporting process and its aftermath immensely traumatising. Many are met with dismissive attitudes, victim blaming, and prejudice. Survivors told Amnesty that the fear of not being believed or even being blamed and shamed by police and justice officials were among the primary reasons for not reporting rape.

Kirstine, a 39-year-old journalist, tried to file a report of rape to the police on four occasions. On her second attempt she was taken to a police cell and warned that she could go to prison if she was lying. She described how the reporting process meant “enduring new fear, shame and humiliation” and said: “If I was 20 years old, I wouldn’t have proceeded after the first attempt.”

Another woman told Amnesty how intimidated she felt going to the police: “I was just one 21-year-old woman, sitting there with two guys looking at me, saying, ‘are you sure you want to report this?’…I was just a young girl ‘claiming’ to have been raped.”

Despite national police guidelines on handling rape cases in Denmark, current police practice remains inconsistent and often falls short of both these guidelines and of international standards.

Emilie said she would not go to the police if she was raped again: “When they really push me in court, it is almost like experiencing it all over again, and then you end up feeling worse about yourself, feeling like ‘it’s my fault, it was me who did something wrong.’”

Amnesty is calling on the Danish government to change the current legislation to adopt a consent-based rape definition.