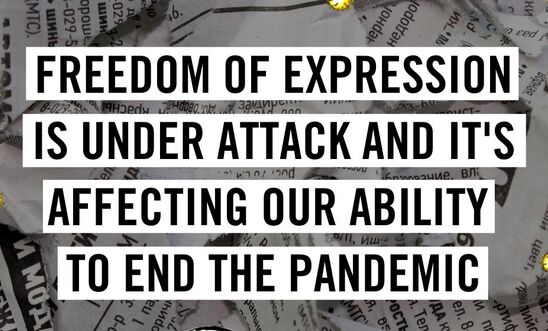 China, Russia, Philippines, Nicaragua and Tanzania among the many countries censoring journalists

A deadly combination of censorship and misinformation during the Covid-19 pandemic has – and continues to have - a devastating impact on peoples’ ability to access accurate and up-to-date information during the ongoing global health crisis, said Amnesty International in a new 40-page report published today (19 Oct).

Silenced and Misinformed: Freedom of Expression in Danger During Covid-19 reveals how the limiting of freedom of expression as well as the ramping up of punishment throughout the crisis has significantly reduced the quality of information reaching populations around the world.

The report outlines how the pandemic has provided dangerous conditions whereby governments can introduce new legislation to shut down independent reporting, as well as attack people who have been critical or even attempted to investigate their government’s response to the virus.

“Throughout the pandemic, governments have launched an unprecedented attack on freedom of expression, severely curtailing peoples’ rights. Communication channels have been targeted, social media has been censored, and media outlets have been closed down – all of which are having a dire impact of the public’s ability to access vital information about how to deal with Covid-19.

“In the midst of a pandemic, journalists and health professionals have been silenced and imprisoned. Consequently, people have been unable to access information about Covid-19, including how to protect themselves and their communities. Approximately five million people have lost their lives to Covid-19 and lack of information will have likely been a contributory factor.”

China’s government has a long history of controlling freedom of expression and the ongoing pandemic is yet another example of how those who speak out are silenced.

As early as December 2019 healthworkers as well as professional and citizen journalists attempted to raise the alarm about the risk of a global pandemic. However, they were quickly targeted by the government for reporting on the outbreak of what was then an unknown disease.

By February 2020, 5,511 criminal investigations had been opened against individuals who published information about the outbreak for “fabricating and deliberately disseminating false and harmful information”.

In one particularly harrowing case, citizen journalist Zhang Zhan travelled to Wuhan in February 2020 to report on the Covid-19 outbreak. By May she had gone missing. It was later revealed that she had been detained by police, charged with “picking quarrels and provoking trouble” and handed a four-year prison sentence.

Tightening muzzles around the world

Numerous other countries have also used oppressive laws to restrict freedom of expression and silence critics during the pandemic.

Last April, Russia expanded its existing anti-“fake news” legislation and introduced criminal penalties for “public dissemination of knowingly false information” in the context of emergencies. Although the amendments have been described as part of the authorities’ response to Covid-19, these measures will remain in force far beyond the pandemic.

In Tanzania, the government introduced a raft of new laws and uses them to silence journalists, human rights defenders and members of the political opposition. Under former President Magufuli’s administration, the Tanzanian government denied the very existence of Covid-19. From March to May last year, authorities used laws prohibiting and criminalising “false news” and other measures to restrict media coverage of the government’s handling of Covid-19.

In March 2020,the Philippines enacted the "Bayanihan to Heal as One Act", which granted Philippine President Rodrigo Duterte special powers to address the pandemic and included a provision that punishes “creating, perpetuating or spreading false information” with up to two months in prison,  up  to  P1  million  in  fines (approximately £14,460/$19,860 USD), or both.

While initially trying to downplay the impact of the pandemic and intimidate those raising concerns, the Nicaraguan authorities used Covid-19 to introduce the “Special Law on Cybercrimes” in October last year. In practice, it enables authorities to punish those who criticise government policies and gives them ample discretion to repress freedom of expression.

“It’s clear Covid-19 related restrictions on freedom of expression are not just time-bound, extraordinary measures to deal with a temporary crisis. They are part of an onslaught on human rights that has been taking place globally in the last few years – and governments have found another excuse to ramp up their attack on civil society.

“Restricting freedom of expression is dangerous and must not become the new normal. Governments must urgently lift such restrictions and guarantee the free flow of information to protect the public’s right to health.”

Amnesty’s report also highlights the role of social media companies in facilitating the rapid spread of misinformation relating to Covid-19.  These platforms are designed to amplify attention-grabbing content to engage users and have done very little due diligence to prevent the spread of false and misleading information.

The onslaught of misinformation – whether that be through social media companies or people in a position of power seeking to spread division and confusion for their own gain - is posing a serious threat to the rights to freedom of expression and to health. It is making it increasingly difficult for individuals to develop a well-informed, objective opinion and make educated choices about their health based on the best available scientific facts. A variety of sources is key, as is the ability to challenge and debate available information.

Amnesty is calling on countries to stop using the pandemic as an excuse to silence independent journalism, lift all undue restrictions on the right to freedom of expression and provide credible, reliable, accessible information so the public can be fully informed about the pandemic.

“As we urge governments and Big Pharma companies to ensure vaccines are made available to everyone around the world, social media companies must also ensure the public has unfettered access to accurate, evidence-based and timely information. This is a crucial step to minimise vaccine hesitancy driven by misinformation."