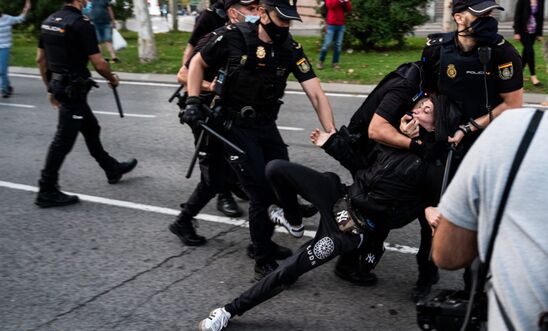 Police arresting a protester in Madrid, Spain, after violent clashes during a protest against the new measures to stop the spread of coronavirus © Marcos del Mazo/LightRocket/Getty

Abusive policing to combat COVID-19 have violated human rights, and in some instances made the health crisis worse, in numerous countries around the world, Amnesty International warned today.

In a new report - COVID-19 Crackdowns: Police Abuse and the Global Pandemic – Amnesty documented cases in 60 countries where law-enforcement agencies committed human rights abuses in the name of tackling the virus. This includes cases where people were killed or severely injured for allegedly breaching restrictions, or for protesting against detention conditions.

In Iran, for example, the security forces reportedly used live ammunition and tear gas to suppress protests over COVID-19 safety fears in prisons, killing and injuring several people. In Kenya, in the first five days of a curfew, at least seven people were killed and 16 hospitalised as a result of excessive police operations.

In South Africa, police fired rubber bullets at people ‘loitering’ on the streets on the first day of lockdown, and in Chechnya video footage showed police kicking and assaulting a man for not wearing a mask. In Angola, an investigation by Amnesty and Angolan rights organisation OMUNGA found that police enforcing COVID-19 restrictions killed at least seven young men between May and July.

While some limitations on human rights can be justified during a pandemic to protect public health or other pressing social need, many governments have gone far beyond reasonable and justified restrictions.

“Security forces all over the world are widely violating international law during the pandemic, using excessive and unnecessary force to implement lockdowns and curfews.

“The horrific abuses committed on the pretext of fighting COVID-19 include Angolan police shooting a teenage boy in the face for allegedly breaking curfew, and police in El Salvador shooting a man in the legs after he went out to buy food.

“While the role of law-enforcement at this moment is vital to protect people’s health and lives, the over reliance on coercive measures to enforce public health restrictions is making things worse. The profound impact of the pandemic on people’s lives compounds the need for policing to be carried out with full respect for human rights.”

Amnesty’s report highlights mass and arbitrary arrests by law-enforcement, showing how police in numerous countries have arrested and detained people for violating quarantine measures; for violating restrictions on travel or holding meetings; for participating in peaceful protests; and for speaking out to criticise their government’s handling of the pandemic.

In the Dominican Republic for example, police detained approximately 85,000 people between 20 March and 30 June, allegedly for non-compliance with the curfew. Between March and May, 510 people in Turkey were reported to have been detained for questioning on account of “sharing provocative coronavirus posts” on social media.

For example, in Slovakia law enforcement and military personnel cordoned off Roma settlements under quarantine, adding to the stigma and prejudice these communities already face. The aggressive application of COVID-19 restrictions has also led to people being forcibly evicted and left without a place where to protect themselves from COVID-19.

In France, volunteers from Human Rights Observers documented 175 cases of forced evictions of migrants by law-enforcement officials in Calais between March and May.

Many countries have also used the pandemic as a pretext to introduce laws and policies that violate international law and roll back human rights guarantees, including unduly restricting the rights to freedom of peaceful assembly and freedom of expression.

For example, at least 16 people were killed by security officers in Wolaita Zone in Ethiopia in August following protests against the arrests of local leaders and activists, allegedly for holding a meeting in contravention of COVID-19 restrictions.

Under international human rights law, restrictions can be lawfully placed on the right to freedom of peaceful assembly in order to protect public health or other legitimate interests, but they must be lawful, necessary and proportionate to a specific aim. However, in many instances, restrictions went much further - for example imposing blanket bans on protests; a prohibition on protests where other public gatherings of similar sizes remained unaffected; or instances where force was used against peaceful protesters.