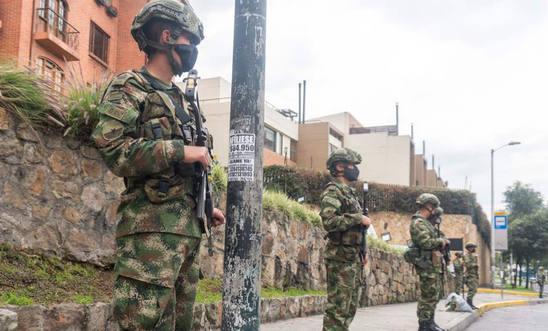 ‘Their right to protest should not be labeled as “vandalism and terrorism”, as President Iván Duque has done’ - Erika Guevara-Rosas

Ahead of further planned protests in Colombia today, Amnesty International has published evidence of excessive and brutal use of force being used against protesters by the security forces.

Amnesty’s Digital Verification Corps has analysed audiovisual evidence, and can confirm that that Colombian police have used lethal weaponry - including rifles and semi-automatic weapons, as well as tear gas and water cannon - against protesters in several parts of the country.

The Colombian authorities’ excessive response is part of a clear pattern of torture and excessive use of force being used against people protesting in the country.

“It is deeply alarming to see the heavy-handed crowd control response across the country.

“The people’s discontent over the economic crisis is clear - it is unjust and puts their human rights at risk.

“Their right to protest should not be labeled as ‘vandalism and terrorism’, as President Iván Duque has done, nor be used as an excuse for violent repression.

“The Colombian authorities must end the repression of demonstrations, cease the militarisation of cities and ensure that respect for and guarantee of human rights are at the centre of any public policy proposal, including tax reforms.

“The next step is for the Government to investigate all allegations of excessive use of force against demonstrators, which has resulted in dozens of people being killed and injured, led to arbitrary detentions, acts of torture and sexual violence, and reports of people disappearing.

“The authorities must also respect freedom of expression and the press, and ensure that journalists can cover the news safely.”

The Colombian government must ensure that any public tax policy it adopts is designed and implemented in line with Colombia's international human rights obligations. It must ensure that measures are temporary, reasonable and proportionate, that less restrictive measures have been exhausted, and that the genuine participation of the individuals and groups involved is guaranteed. The Government should urgently undertake a human rights impact assessment of these measures to ensure that they are non-discriminatory and that they respect the rights of historically-marginalised groups and take into account the impact of COVID-19.