Cameroon: Prisons at risk of ‘becoming epicentres of the pandemic’ 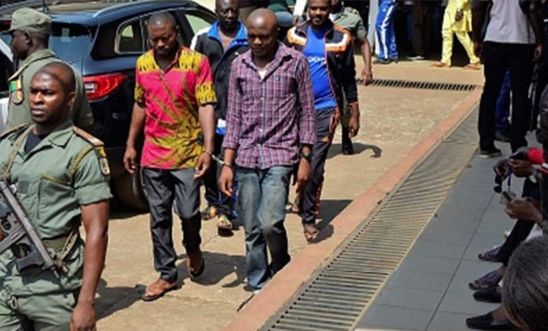 The Cameroonian authorities must be transparent about the spread of COVID-19 in prisons, provide detainees with adequate medical care and stop exacerbating overcrowding with arbitrary arrests, Amnesty International said today.

While authorities have not confirmed or denied the presence of the virus in detention facilities, Amnesty has received information stating the number of current and former detainees tested positive could be much higher. At least one prisoner has tested positive for the virus at the Kondengui central prison in Yaoundé and has been taken to a health facility outside the prison.

“As COVID-19 spreads in Cameroon, it is essential that detainees and their families have access to accurate information about the virus. The poor conditions in detention centres mean they risk becoming epicentres of the pandemic unless urgent action is taken.

“Keeping elderly or sick people in detention or releasing them just to blow their last breath outside is inhumane.  Authorities must treat prisoners with the respect due to their inherent dignity and value as human beings.

“Authorities must take all necessary measures to allow those in prison to enjoy standard health-care services free of charge and without discrimination, and to urgently reduce the overall number of people in detention.”

According to the National Commission On Human Rights And Freedoms, the occupancy rate was already high in many prisons in Cameroon, reaching:

Following a presidential decree on 15 April commuting and remitting sentences, hundreds of prisoners have been released in all the regions. In the Far North Region, 831 prisoners were released, and the number of detainees fell from 3,370 to 2,547 detainees, according to state media. An independent source also confirmed that 214 detainees were released in the Maroua prison (Far North).

“Prisoners often die in this prison; no one can really say who is contaminated”

Prison conditions are dire in the central prison of Yaoundé. Most inmates who present COVID-19 symptoms are treated using hot liquids mixed with ginger and garlic.

“Prisoners often die in this prison; no one can really say who is contaminated. Many inmates are sick and because of the congestion everyone is scared. Those who are sick also fear going to the prison health services because of rumours of COVID-19 patients being admitted there.”

A letter sent on 21 April to the Ministry of Justice on behalf of detainees highlighted the persistent overcrowding, describing the nursing station in prisons as "saturated with sick detainees" and the medical staff as "overwhelmed".

Information received by Amnesty shows that five deaths have been reported in a week in March, and two sick detainees died shortly after their release. One was buried in conditions applied to COVID-19 deaths without the presence of his family, although no test was made to determine the cause of death.

Amnesty calls for the release of prisoners of conscience

Measures to fight the spread of the virus in detention facilities should include the release of detainees who are particularly vulnerable to COVID-19 such as the elderly or those with underlying medical conditions.

Even if authorities recently released some detainees, they failed to positively respond to the National Commission On Human Rights And Freedoms’ call to release the elderly who are most vulnerable to the virus, and to the UN call to release sick detainees, and those jailed without legal basis, including prisoners of conscience. Some of these include: