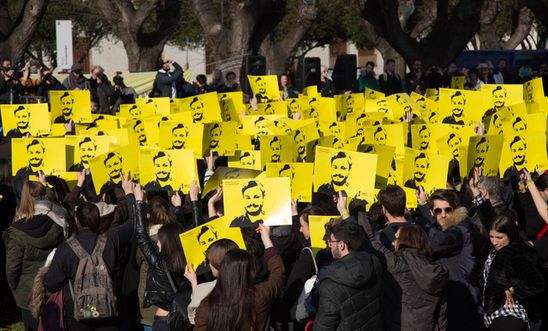 Minute’s silence to be held at 6.41pm, time of last contact with murdered Italian PhD researcher

‘We must have answers and justice for Giulio’ - Sue Woodsford, Cambridge City Amnesty

Attendees at the Cambridge event will hold placards bearing the message “Truth for Giulio”, and statements from Amnesty campaigners and Mr Regeni’s parents (to be confirmed) will be read out.

At exactly 6.41pm - the time of the last-known communication with the 28-year-old before his disappearance on 25 January 2016 - there will be a minute’s silence.

Regeni, a student at Girton College, had travelled to Egypt to research the country’s trade unions as part of his PhD work. After going missing his mutilated body was found ten days later in a ditch outside Cairo. Evidence strongly suggests the involvement of the Egyptian authorities in Regeni’s killing, though no charges have ever been brought against those responsible.

“Giulio’s death remains a tragedy for everyone who knew him and stands as a haunting reminder of Egypt’s appalling human rights record.

“On this day three years after his death, we remember Giulio and reiterate our demand that a full, impartial and independent investigation is made into his terrible murder.

“We must have answers and justice for Giulio.”

A seminar on Monday 4 February (12-2pm) in the Old Divinity School at St John’s College will discuss Regeni’s case. Taher Mokhtra, a former Egyptian prisoner, is among the confirmed speakers and members of the public are encouraged to attend.