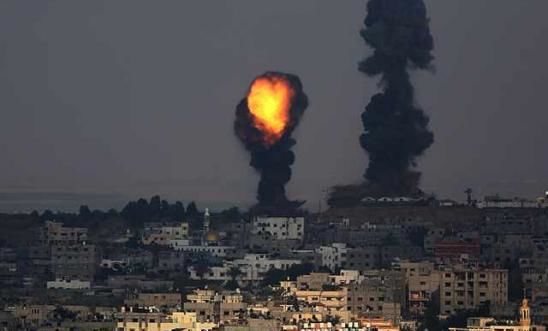 Air strikes on Gaza have used US-made weaponry © EPA/MOHAMMED SABER
The US government must immediately end its deliveries of large quantities of arms to Israel, which are providing the tools to commit further serious violations of international law in Gaza, said Amnesty International, as it called for a total arms embargo on all parties to the conflict.
The call comes amid reports that the Pentagon has approved the immediate transfer of grenades and mortar rounds to the Israeli armed forces from a US stockpile pre-positioned in Israel, and follows a shipment of 4.3 tons of US-manufactured rocket motors, which arrived in the Israeli port of Haifa on 15 July.
These deliveries add to more than US$62 million worth of munitions - including guided missile parts and rocket launchers, artillery parts and small arms - already exported from the USA to Israel between January and May this year. Shipments included nearly $27million for “rocket launchers”, $9.3 million of “parts of guided missiles” and nearly $762,000 for “bombs, grenades and munitions of war”. The USA is by far the world’s largest exporter of military equipment to Israel. Since 2012, it has exported $276 million worth of basic weapons and munitions, a figure that excludes exports of military transport equipment and high technologies (see the table at http://bit.ly/UE089K).
The news on 30 July that the USA had allowed the resupply of munitions to Israel came the same day the US government condemned the shelling of a UN school in Gaza which killed at least 20 people, including children and UN humanitarian workers.
Brian Wood, Head of Arms Control and Human Rights at Amnesty International, said:

“It is deeply cynical for the White House to condemn the deaths and injuries of Palestinians, including children, and humanitarian workers, when it knows full well that the Israeli military responsible for such attacks are armed to the teeth with weapons and equipment bankrolled by US taxpayers.
“The US government is adding fuel to the fire by continuing its supply of the type of arms being used by Israel’s armed forces to violate human rights.
“As the leading arms exporter to Israel, the USA must lead the way and demonstrate its proclaimed respect for human rights and international humanitarian law by urgently suspending arms transfers to Israel and pushing for a UN arms embargo on all parties to the conflict. By failing to do so it is displaying a callous disregard for lives being lost in the conflict on all sides.”

Amnesty is calling on the UN to immediately impose a comprehensive arms embargo on Israel, Hamas and Palestinian armed groups with the aim of preventing violations of international humanitarian law and human rights by all sides. In the absence of a UN arms embargo, the organisation is calling on all states to unilaterally suspend all transfers of military equipment, assistance and munitions to all parties to the conflict. They should not resume until violations committed in previous conflicts are properly investigated with those responsible brought to justice.
More than 1,400 Palestinians, mostly civilians, have been killed since Israel began its latest offensive in Gaza on 8 July. At least 56 Israeli soldiers have died in the conflict, as well as three civilians in Israel, including a Thai national.

Palestinian armed groups have continued to fire rockets indiscriminately into Israel, endangering civilians in flagrant violation of international law. Amnesty has repeatedly called for an immediate end to such attacks, which amount to war crimes.
Last week the speaker of the Iranian parliament said Iran had provided arms manufacturing know-how to Hamas in Gaza. In November 2012 he said Iran had given both financial and military support to Hamas, and the Commander of Iran’s Revolutionary Guards said missile technology has been supplied. Hamas fighters have admitted to firing Iranian-type Fajr 5 missiles towards Tel Aviv, but mostly fire shorter-range M25 or “Qassam” rockets and GRAD rockets.

Over 35,000 people have supported an Amnesty call on the Foreign Secretary Philip Hammond to stop UK arms transfers to Israel.

Amnesty is calling for an immediate suspension of all UK arms transfers to Israel - as well as for pressure to be exerted on those supplying Palestinian groups in Gaza with munitions. Last year the UK sold £6.3m of arms to Israel - in the past, UK-supplied equipment has been used by the Israeli military to commit human rights violations in Gaza.