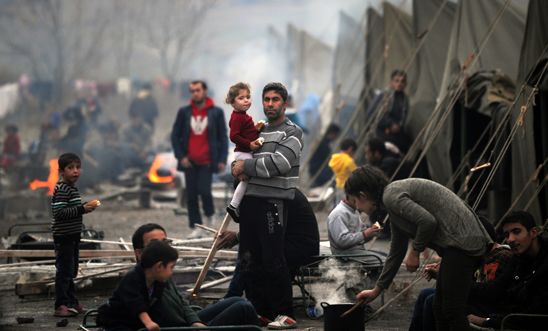 1,000 held in metal containers, tents and dilapidated buildings at former military base

Amnesty International today called on the Bulgarian authorities to act immediately to improve the conditions at an emergency accommodation centre for asylum seekers near the Turkish border, after scores of its residents – including people who fled armed conflict in Afghanistan and Syria – staged a protest today.

As many as 100 people threatened to launch a hunger strike in protest at the deplorable living conditions at Harmanli camp in south-eastern Bulgaria where around 1,000 asylum-seekers are being detained on a former military base.

“It is appalling that people seeking refuge in the European Union are being trapped in limbo in such awful conditions with winter rapidly approaching. The Bulgarian asylum system has a burgeoning crisis with a backlog of applications – the authorities must act fast to ensure they don’t have a humanitarian crisis on their hands too.

“We witnessed the deplorable conditions where some 1,000 asylum-seekers are being held in metal containers, tents and a dilapidated building of a former military complex. They must be given immediate access to proper asylum procedures and the Bulgarian authorities must ensure they have access to basic necessities such as proper food, shelter and sanitation. This is their right under international law.”

Although the Harmanli camp is already crowded, the Bulgarian authorities continue sending new asylum seekers there. Last week, Amnesty researchers witnessed the arrival of a group of Syrian men. The newcomers were equipped with nothing more than a flimsy mattress and two thin, damp blankets – hardly adequate cover to pass the cold nights in an unheated tent.

Pregnant women, unaccompanied minors and other vulnerable individuals face the same dire conditions. Amnesty recently interviewed a woman who was six-months pregnant – she had not eaten for two days and had to sleep on a mattress on the floor.

The camp has only three toilets and eight showers, but most camp residents Amnesty spoke to said they refuse to use them as they are completely filthy. The camp’s residents are not allowed to leave to buy essential food. Instead, they rely on a supply of staples like potatoes, rice and bread. Many of them have been living in these conditions for as long as a month.

“Some of those trapped in Harmanli have been here for over a month without being told why and what will happen with them.

"There are no lawyers, there is no person in charge whom we can talk to.”
Malalai, Afghan refugee

“If you have money, you get out. Otherwise you stay here.

"All of us here, Afghans and Syrians got together to protest against these conditions.”

“The camp in Harmanli is completely unlawful. There is no basis for its establishment in any of the adopted pieces of legislation and it is neither a centre for asylum seekers, nor a detention centre for irregular migrants.”