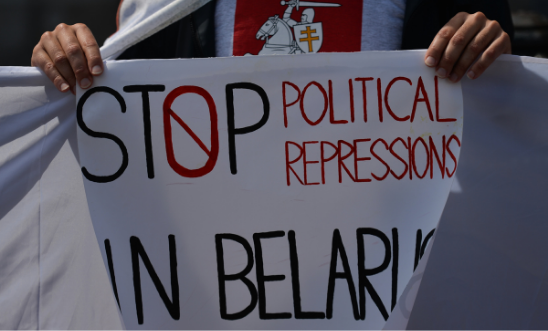 Reacting to the 18-year prison sentence handed down today to Syarhei Tsikhanouski who was arrested in May 2020 after announcing his intention to run for the Belarusian presidency, Marie Struthers Amnesty International’s Director for Eastern Europe and Central Asia, said:

“This is today's Belarus, where those who wish to oppose the authorities face a terrible choice between languishing in prison or leaving their homeland.

“Syarhei Tsikhanouski’s case is emblematic of the repression unleashed by the Belarusian government against its own people. He was arrested on trumped-up riot charges just weeks after announcing his intention to run for the presidency. His wife, Svyatlana Tikhanouskaya, who ran in his place, was forced to leave the country after being harassed and intimidated by the authorities.

“Syarhei Tsikhanouski and his associates have been unlawfully persecuted on overtly political grounds and must be freed immediately.

“The international community must not forget about them and should exercise as much pressure on Minsk as possible to end their imprisonment and the relentless repression in Belarus.”

Their trial began in late June this year behind closed doors. All hearings took place not in a court room but in the Homel pre-trial detention center. No information about the court proceedings was made available.

Amnesty analysed their case and concluded that all charges are unfounded and politically motivated.