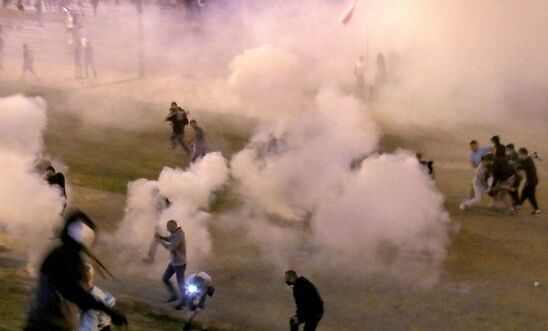 Journalists being arrested, beaten, and targeted with rubber bullets

The Belarusian authorities must immediately end their assault on journalists, Amnesty International said today, amid reports of journalists being arrested, beaten, and targeted with rubber bullets while covering the vicious police crackdown on protests.

Both local and international journalists have been attacked, had their cameras smashed and their footage deleted, including reporters from Associated Press and BBC.

Thousands of protesters have been detained, and the Belarusian Journalists Association has documented the detentions of at least 55 journalists.

“Journalists in Belarus are doing heroic work to ensure the world knows about the authorities’ brutal repression of protests.

“It is horrifying to see the lengths to which the government will go to suppress this information – attacking reporters with batons and rubber bullets, destroying their equipment, and throwing dozens in jail. The government has even disabled the internet to prevent people from sharing information

“As unprecedented numbers of people continue to take to the streets in Belarus, it is essential that press freedom is protected and that no one is harmed simply for doing their job.”

Both local and international journalists have been targeted. On the evening of 11 August, security forces in Minsk attacked a TV crew from the BBC Russian Service, all of whom were wearing identification vests and bearing official accreditation cards.

Several men in unmarked black uniforms who appeared to be security forces demanded to see the journalists’ accreditation. One man tore the card from a correspondent's neck, snatched the camera from her and tried to break it. The men then beat another BBC journalist and struck several blows to his camera. In this case, the journalists were not detained.

On the first day of protests, men in camouflage uniforms shot a rubber bullet at Natalia Lubneuskaya, a reporter with Nasha Niva, wounding her in the leg. Nasha Niva is one of the few independent media outlets in Belarus and its staff have been subjected to years of harassment by the authorities.

Amnesty is calling on the Belarusian authorities to immediately and unconditionally release journalists detained solely for fulfilling their professional duties. They must also release all peaceful activists detained solely for exercising their rights to freedom of expression and assembly. They must end reprisals against peaceful protesters, and investigate acts of unlawful force by police.